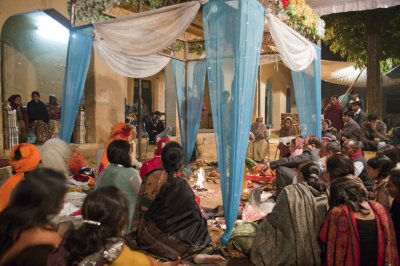 Back in Toronto and freezing my a$$ off!! I’m happy to be home and hanging out with family and friends but missing India, and hanging out with friends. Why can’t we have everything all the time? If anyone hears about a job, that’ll need me in India every few months, that would be good too! 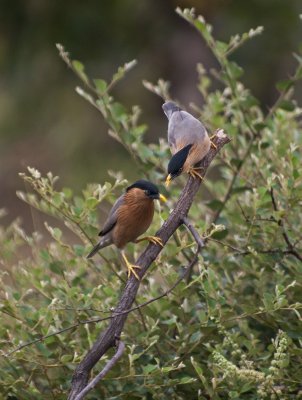 So, onto the bloggy stuff! When last I left you, I was heading off to Panna National Park. The people at Ken River Lodge are among my favs in India, as is the park. It was one of the first places I visited on my first trip to India and many of these people have become good friends. 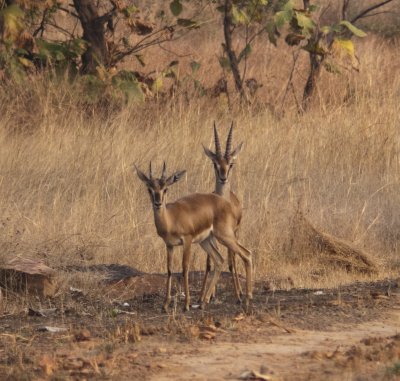 I hadn’t arranged for a car to pick me up this trip. Feeling rather cocky and seasoned, I decided I’d just pick up a cab at the airport. Not the best idea in Khajuraho as it turns out! First the displayed government set rates were as expensive as the arranged nice car from the lodge, and the airport is rather removed from the city, so you can’t really walk outside the airport to get one off the street. The cab I ‘luckily’ ended up with was a decrepit old Ambassador that looked like it rolled off the assembly line during the British Raj. It almost managed a rocking 20km per hour too! As we approached the temples that I had assured my driver’s ‘manager?’(also riding along in the cab) repeatedly I wasn’t interested in visiting (a 4th time), I asked if the car had a hyper-drive or would we arrive at Panna the next morning. No problem Madame, I was switching to a new car! Huh… The new car was, I think, the buddy of the ‘manager’. We transferred to this ‘new’ car, but, the drivers were very concerned with the front tire, which I gather had a slow leak. A detour to add some air into it, and we were off again. Periodically stopping, allowing the driver to get out and inspect the tire a few times. 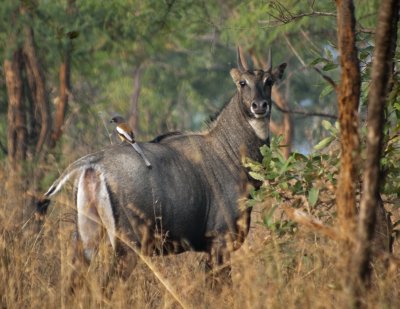 We finally reached the turn-off for Ken River Lodge, or rather reached about 10 yard from the turn-off, when it was decided the tire must be changed after all! Had a fun time with some kids, in the growing crowd of people coming along to watch this interesting affair, and we were back off to the lodge again. I was never so happy to arrive somewhere! Went up to see everyone and have a drink, when the driver followed me up to give me his card… so I could call him to return to the airport when I was done! Yep, kept that card!! 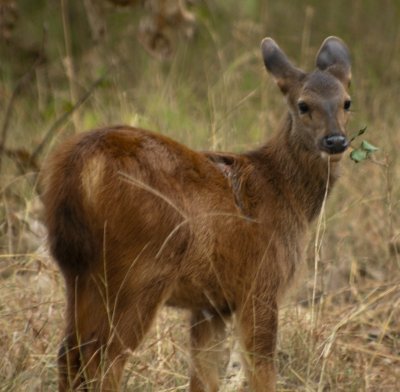 Baby sambar with leopard wound on its shoulder 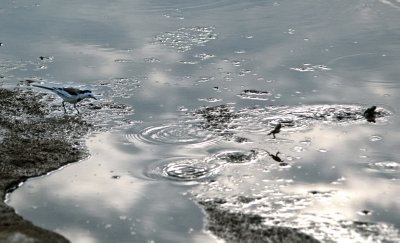 Wagtail chasing frogs out of the way

Happily this visit reunited me with Jennifer Buxton, a wonderful woman from England that I met last March. For those who haven’t already heard me talking about her, Jennifer is a wonderful artist (www.tigertigerburningbright.com) who has been coming to Ken River and Kings Lodge in Bandhavgarh for over 7 years, and who, together with Bhavana (who owns the lodge with her husband), have started a school in Panna that now has 150 students. Most of the work they do here stems from the idea that if the benefits coming from tourism actually make it to the village level, the locals will have a vested interest in keeping the forests healthy (and thereby the tigers). 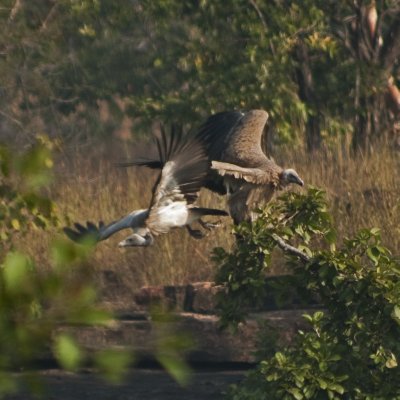 Many of these villagers were displaced by the government following a western-style idea of keeping all people out of the forest. Not necessarily a good thing, because these people, who had previously lived well and harmoniously in the forest, had to eek out a living in very poor conditions and in a way completely unfamiliar to them. It is a tremendously complex situation that only seems to be more complex the more you start to understand it, but Jennifer, Bhavana, Vinnie, Shakhar et. al. still work to try and make a difference and are very inspiring. 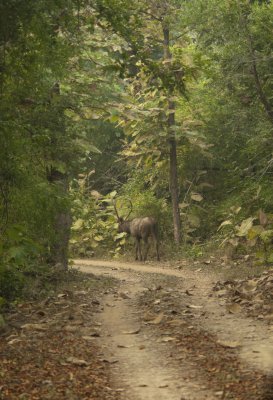 The park itself was remarkably green this trip given the lack of monsoon rains in the summer. However, even though the plants were so lush, the water levels were incredibly low – lower than I’ve seen, even during April visits. I think the animals are going to have a tough time this summer. 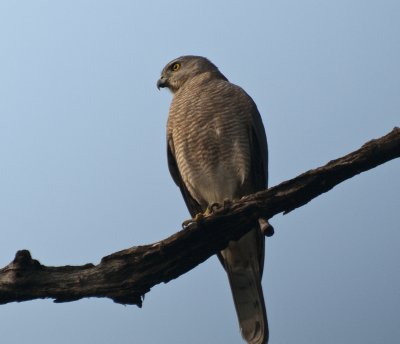 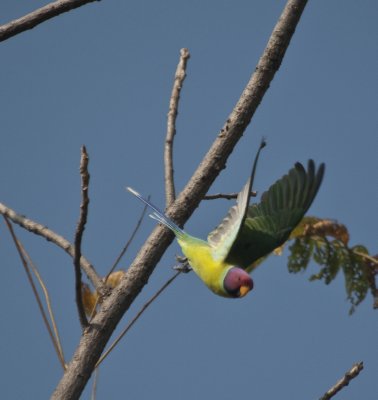 Had some wonderful sightings and some unusual ones. On the way back from one drive we saw a rusty spotted cat dashing across the road from brush to brush. A very shy nocturnal cat and the smallest in India. There were of course tons of parakeets making sure they’re noticed (loud little buggers!) – both rose-ringed and plum headed. Saw a black-shouldered kite in a death spiral with an Indian roller. Loads of white-eyed buzzards and massive crocs basking in the warmth of the sun. One croc was showing off teeth so bright and white, he could vie for a Crest Whitestrips commercial! 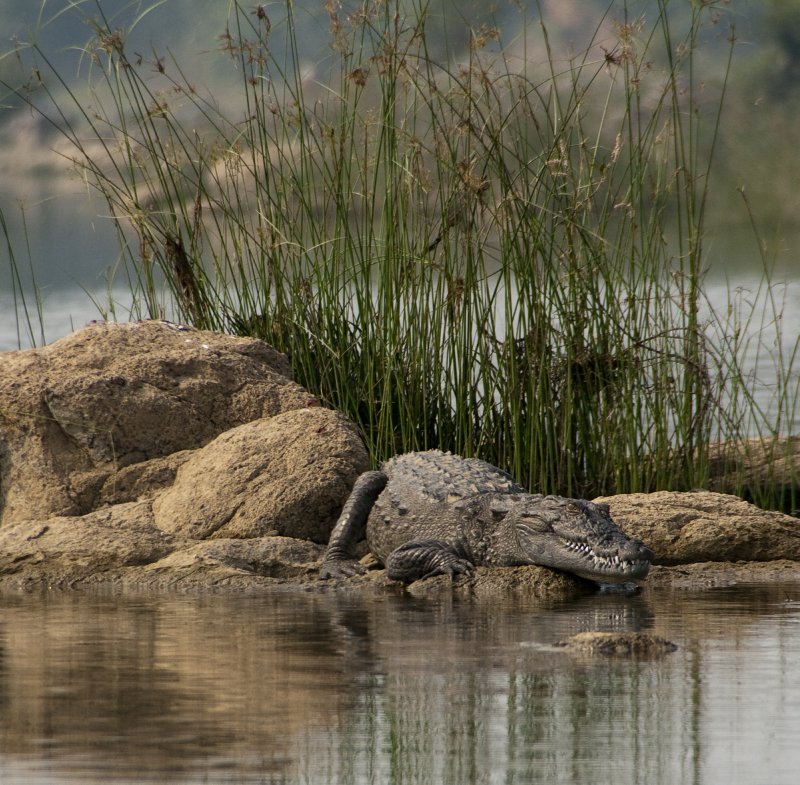 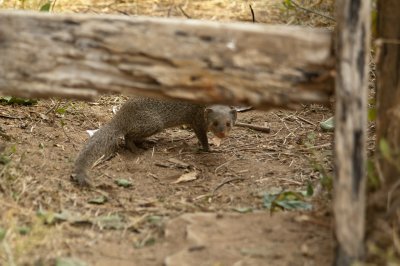 One afternoon we went into the nala (valley) behind the lodge to track a large snake the boys had cornered. It was a 5-6 foot checkered keelback snake. Beautiful and really fast. It was hiding in the brush and Trigun flushed it out with a large stick. It came speeding through the brush, causing everyone to jump so quickly out of its way I was sure it must be poisonous, but nope. Good to know the big brave nature boys jump like a city girl when startled too! You’d have thought it was Lynn spotting a spider on her tent! Didn’t get a shot, but pretty exciting. Did get a picture of a tiny little worm snake though. Maybe 8-10 inches with no visible eyes. Its forked tongue was so cute and tiny. 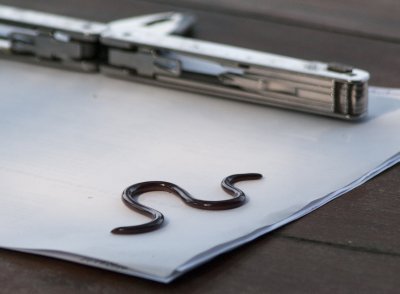 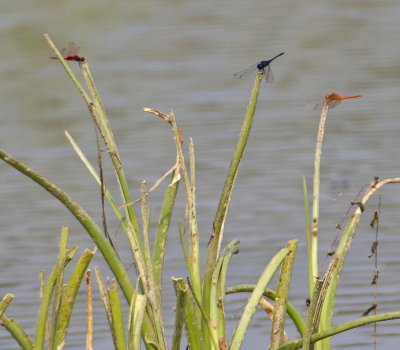 Red, Orange and Blue ~ so many dragonflies here this trip, they often filled the sky in the park.

My flight back to Delhi was 3 hours late, and the airline sent SMS updates to my phone. Yay – extra time! Off we went in the canoe and got some beautiful bird pictures. Including a nesting Eurasion Eagle Owl and elegant open billed storks. Couldn’t put it off any longer and 5 days and 8 drives later and I was too rapidly heading back to Delhi. 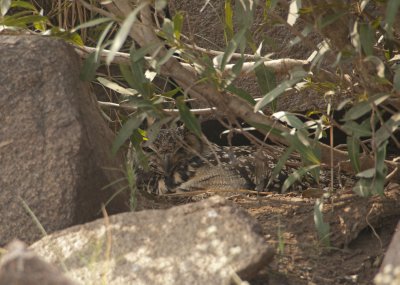 Eurasion Eagle Owl on its nest

Wedding time in Jaipur! Friday evening after I had returned to Delhi, I got a call from Yugdeep to let me know the wedding was back on. However, because of the unexpected death of his father’s elder brother, the ceremonies were scaled back and most of his immediate and all of his father’s family were unable to attend. So I booked a car and was off to Jaipur Sunday morning. I had found out from friends that wearing colours other than yellow or red-based is considered inauspicious for weddings. Although these days people are more apt to wear all colours, given the sensitive nature surrounding this wedding, I left my blue sari at home and raided Lynn’s collection for a red one. 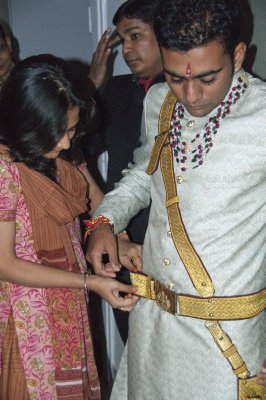 I arrived at 1:30 and met Yugdeep and his lovely and super-capable sister Garima. We followed them to the Forest Training Centre, where we were all to stay, and where all the preparations for the groom’s side were now to be held. I was sharing a room with Vibha, a school friend of Yugdeep’s and together with a few other friends, and a couple of maternal uncles, we were the only people there from Yugdeep’s side. Sadly even his parents could not attend. The shortage of people though did allow me to see and be a part of the preparations far more than I would have been able to if the whole family had been present. Although not what they had hoped for, the wedding was still beautiful and lovely… and long! 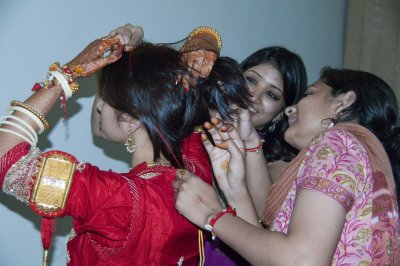 Vibha and Garima getting Abhilasha ready

Yugdeep’s sister ran the show, and boy was it a lot of work. Not only was she organizing and helping Yugdeep, but since the bride was not from Jaipur and unfamiliar with the style of dress, she prepared her. Everyone was wonderfully explaining what was happening as the ceremonies progressed, and I’ll try to describe them here. Any mistakes I make here are mine, and do not reflect what my hosts told me. The whole preparation started at about 4pm with a ritual cleansing of the groom and puja performed by the priest. His outfit included a wonderful coat; tight fitting churidar pants; thick gold ankle bracelet; and a gold belt to carry his family sword, which was 250 years old. An uncle came to wrap his saffron-coloured turban, which was then decked out with all sorts of pins and sparkle. 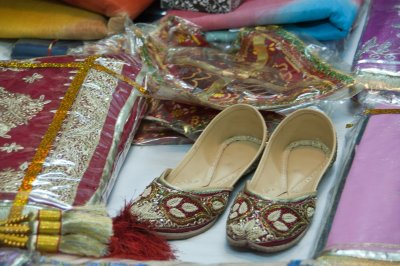 Looking fab and like a Rajput prince, Yugdeep proceeded to a room where more pujas were performed and the reading of the family names. The Barat Nikasi, or departure of the groom was to have seen him depart on an elephant, but that was changed and the men left in SUVs for the wedding venue. We then left for the bride’s place with a huge trunk filled with the trousseau, or palla dastoor – saris, sweets, nuts and the bride’s entire wardrobe. Her elaborate red outfit of a beautiful sparkly skirt, tunic (kurti) and veil was also included: ivory bangles; nose ring; rings; Rakhdi tied to her forehead; heavy thick gold neck hanging called an AAd; gold arm bands (or baju) tied on above her elbows; the sheesphul or headgear; and the pajeb anklets. So elaborate and incredibly uncomfortable looking. 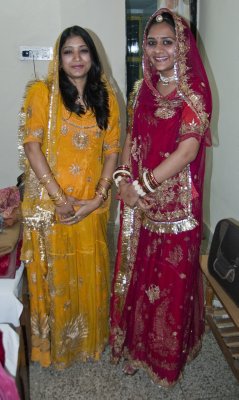 After dressing Abhilasha, it was back to the Forest Centre to get dressed and off to the dinner and wedding ceremony, which actually began about 10pm and concluded at about 2am, with the walk around the agni, or sacred fire 7 times. You’d think that was it, but nope. We luckily got to head back to go to sleep but the bride and groom were up all night completing other puja ceremonies, returning at about 8am and finally getting to shed the outfits. Abhilasha looked completely wiped poor girl. They then had to head out to the family castle to introduce the new bride to the villagers. And, the whole thing would have been far longer if not for the unfortunate tragedy cutting it short. So lucky and thankful to have been able to be there for Yugdeep and to have experienced this time with him. 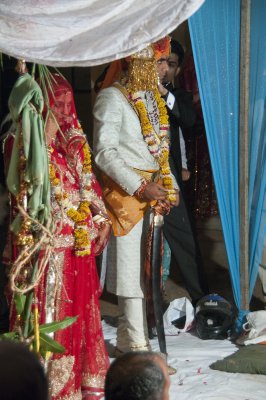 A quick drive and I was then back in Delhi and running around with friends, and getting ready to cook the Christmas dinner for 10 at Lynn’s place. Finding a turkey was a challenge, especially since the US thanksgiving was the previous week and all turkey in Delhi had been gobbled up! We finally sourced two 8lbers at the Cdn High Commission’s restaurant. The ham at PigPo looked a little suspect, so we chose a roast pork instead. We did all the traditional trimmings – stuffing, mashed potatoes, gravy, beans and corn; and traditional deserts – minced pies with rum hardsauce, Nanaimo bars, whipped shortbread and rum balls. Huge success and hugely stuffed!!! The party wound up at 3:30am, leaving me nicely wiped out for my departure less than 24 hours later at 2am.

And just like that, 24 hours later I was back in Toronto… freezing my ass off!!! Time rushes on and this chapter comes to a close… till next time India. 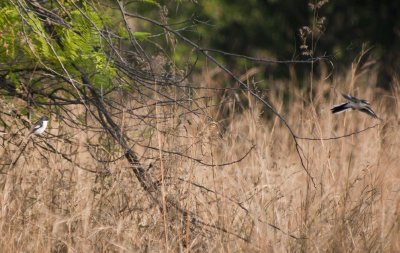