... and a Spectacular Finish at the Canadian Official Residence

My final couple of weeks in India for this trip and what could be better than hanging out with my friend Yugdeep in Bandhavgarh? Not much!! and what a wonderful start our first drive brought! 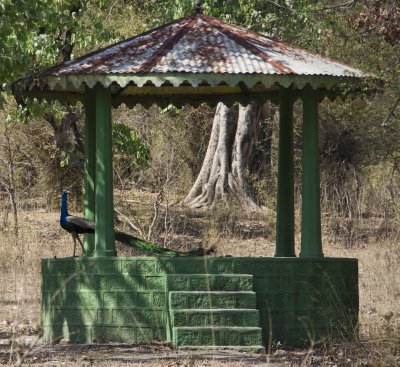 The private courtyard outside my hut

This was my first time staying at Taj Safaris in Bandhavgarh, and was there because it was where my friend and naturalist Yugdeep was currently working, and because at this time of year, it’s actually a bit more affordable! Mahua Kothi lodge is spectacularly lovely. Spacious and luxurious mud-style huts, with large courtyards piled high with pillows and various seating areas, and all set out in thick bamboo thickets. Taj hospitality is typically wonderful, and I think I got the best room in the house, and the best butler – Vishnu from Nepal. A next-door neighbour to another naturalist friend at Ken River, Shukra as it turns out.

So off into the forest I went with Yugdeep. Just he and I, which is another luxury of this time of year. April and May are stinking hot in many parts of the country, but for wildlife: cost, smaller crowds and spectacular photo ops, you can't beat it. 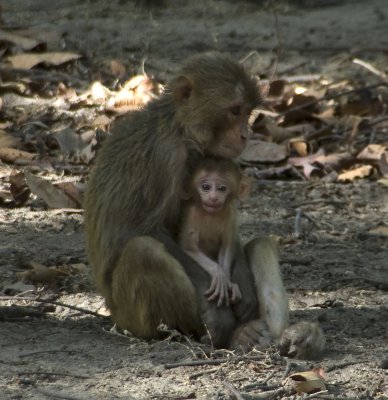 
I had had such wonderful tiger sightings in Tadoba earlier with CV, that my immediate tiger thirst was a little quenched, so we decided to avoid 'the Horde' and meander the forest. Which, happily, you can do again in Bandhavgarh! They’ve broken up the Tala zone and removed the route system. So no more centre-point check-ins - back to roaming at will, chasing alarm calls, or sitting quietly waiting for the action to come to you. 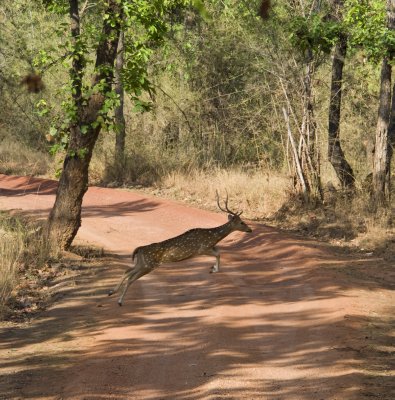 The park gives the appearance of being much emptier this way, since the majority of the vehicles are tiger chasing and sitting at the sites of a more ‘sure-thing’ sighting. They’ve also opened up routes within the zone that have not been opened for a while. I’m cautiously optimistic about the park, having arrived believing it might be my last visit here, to thinking I’ll definitely have to come back. They’re also talking about opening walking zones in the park, and opening up a separate gate and area next year. Fingers and toes are crossed! Might throw in a few eyes too... two at least. 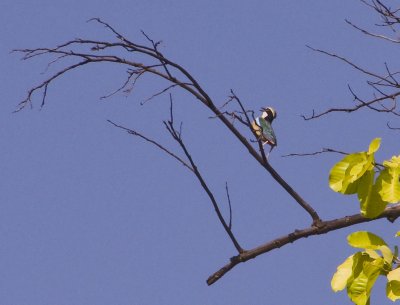 Indian Pitta calling for a girlfriend

But, I digress! Where was I? oh yes, meandering the forest. About 20 minutes in, we were driving through the Barua Nala area, when chitals started to sound the alarm and broke from the undercover, darting across the road. Curious, we slowed down, and looked into the nala (valley) to our right and “tiger”!! 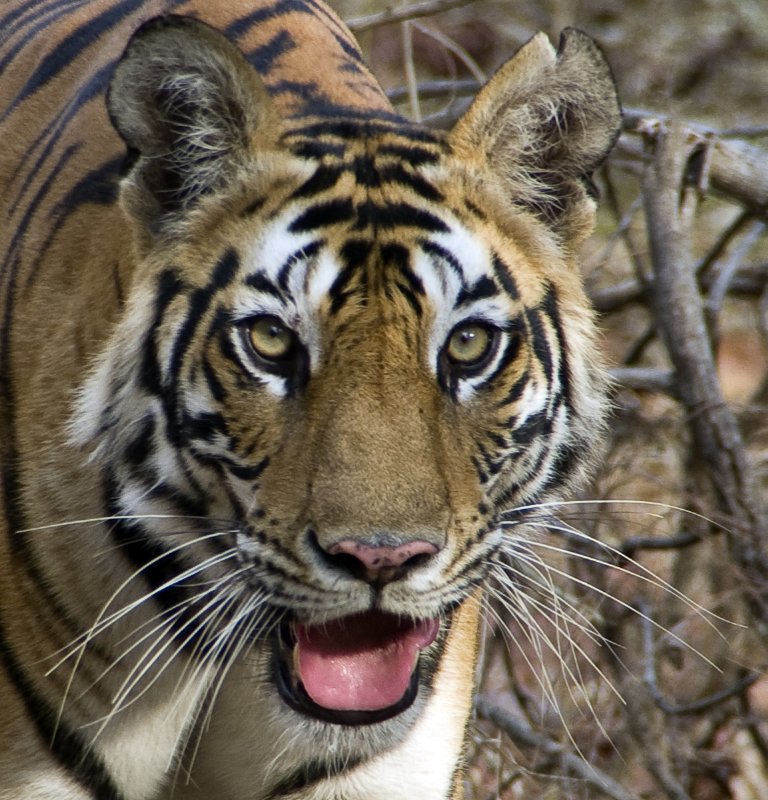 A beautiful girl, about 4-5 years old and referred to as Vanvai. Yugdeep had last seen her a couple of weeks earlier, heavily pregnant and now she wasn’t. She may have left the cubs to get a drink, or maybe try to make a kill since she was panting very heavily and with the way the chitals ran from the nala, this was likely the case. Regardless, she was walking straight for us! 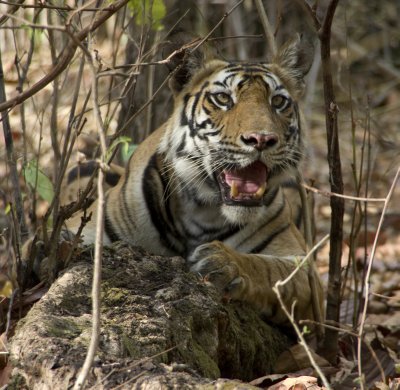 She is apparently a normally shy girl, but we were the only vehicle there, and pretty quiet. She seemed quite calm and unphased by us as she settled in a nearby thicket. What a sighting! 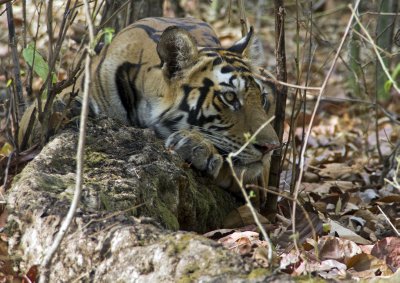 We spent almost an hour with her, as she sprayed, wandered, sat, rubbed up and down trees, walked on the road and sharpened her claws in a dead stump, not 10 feet from us! Unbelievable! And the whole time, no one joined us. 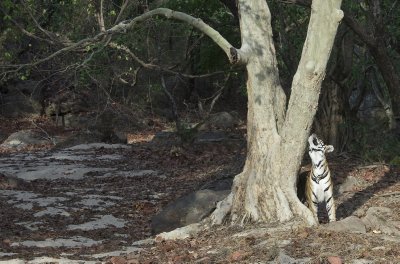 Finally she started to walk back down the nala, and then must have heard something, since she started running. So fast, the ground she covered. Then she broke through the bamboo, and ran across the road and up into the hill. There was intense growling and thrashing about that sounded so close I was actually nervous for the first time, as was Yugdeep. We wondered if she had heard her cubs call, or sensed a predator. Some boars broke cover and moved out of the thicket. Soon the noise died down, and peace swept over the nala again. So exhilarating! 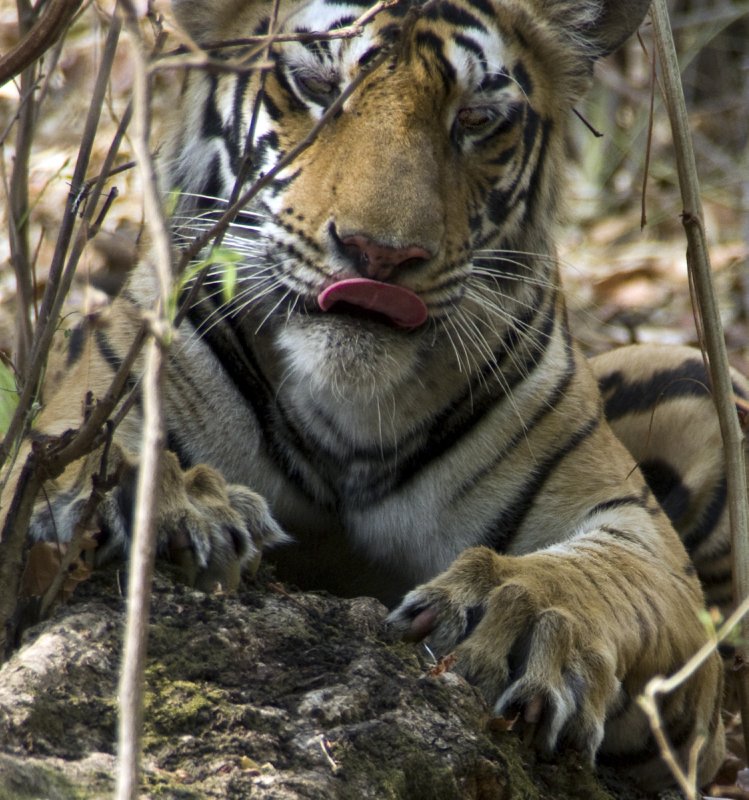 After this long encounter, we moved out and continuing our original meandering plan, coming across 'the Horde' gathered around a female tiger far in the distance and exited the park. Bandhavgarh is back! Please please let it stay!!! 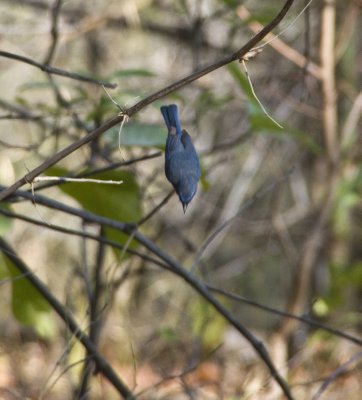 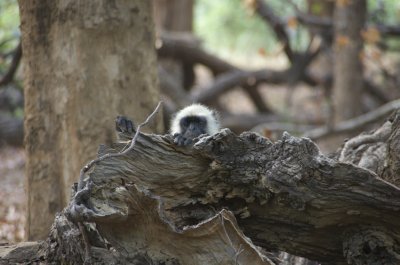 Tuesday morning was a quieter one. Not too much activity happening for the most part, but some lovely birds and explored a newly opened area. Wonderful to photography trees and monkeys that I haven’t been able to do during the last few visits racing around at top speeds.

The Horde, waiting in vain for Bokha to appear.

Came across 'the Horde' gathered around Bokha, who we couldn’t actually see, deep in a thicket. We left to spend time in the forested stream area near the entrance to the Tala zone, looking for racket-tailed drongos and other birds, when the tigress who killed Chorbhera this year sauntered down the stream, just like Chorbhera had done for me many times before. She has a bad eye, from the mortal fight she had with poor Chorbhera. A nice, but quick sighting, before she settled well out of sight in the cool stream. 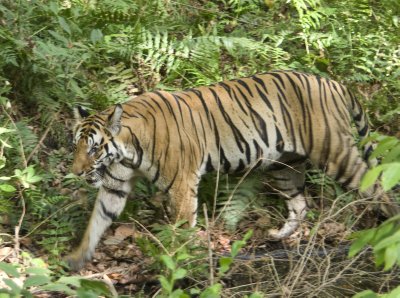 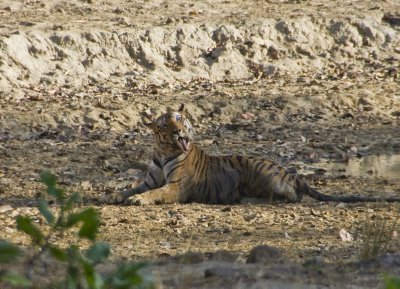 The old boy himself - B2

That afternoon we happily caught up with the park’s patriarch, B2. He was sitting in a water hole for quite some time, then slowly hauled himself out and started grooming, before stretching out for a nap. B2 looks fabulous, heavily muscled and strong, but his movements looked so slow and painful. Not sure if it’s arthritis or a recent injury or strain as Yugdeep thought, but sad to see him move so painfully. 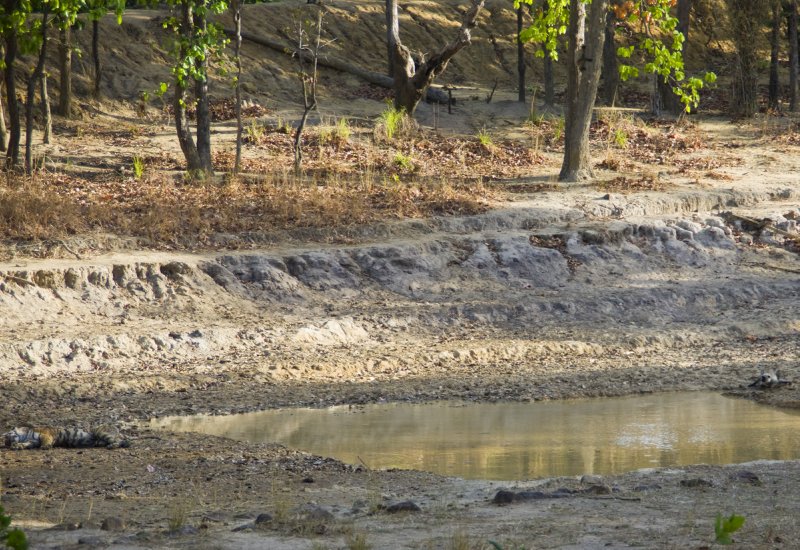 Langur inching his way down to water while B2 naps

Was funny to watch a desperately thirsty langur slowly inch his way to the water. He'd move about a meter, then sit for a few minutes watching, before repeating the performance, over and over, for about 20 minutes. The langur finally, and oh so cautiously grabbed mouthfuls of water. 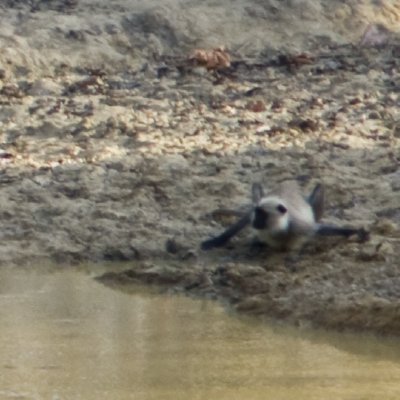 Langur finally grabbing a drink - one eye on B2 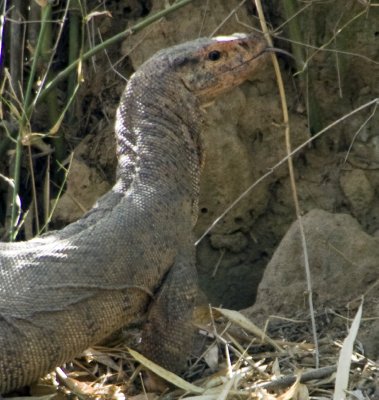 Wednesday morning was the morning of the monitor. We saw 3 monitor lizards, having never seen one before in Bandhavgarh and loads of wonderful birds. Saw paradise flycatchers at a waterhole, along with a black-naped monarch. Then in the entrance nala saw a blue bearded bee-eater, a painted spurfowl couple, a serpent eagle, brown fish owl, sprangled drongo and black-hooded orioles. Also the tiniest baby wildboar I’ve seen to date. At first I thought it was a group of partridge-type birds around the adult, but nope, teeny tiny little striped babies. 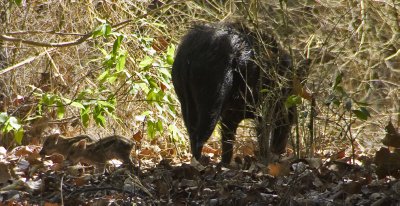 Loving the park again, and loving that I’m loving it!

In the aft, it poured buckets! Including on us, when we went to the village. On the way to Rancha, past Kings Lodge, we chatted with a couple who have a home here. Yesterday they saw Vanvai moving her cubs to a new location. Rancha village is very prosperous, tidy and lovely. Smelling especialy wonderful, as is the forest, with the rain. Got nice and wet, and drove back to the lodge holding umbrellas over us. Very funny looking I’m sure. 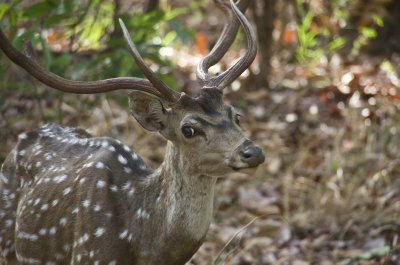 Met a lovely French NBA basketball player at the lodge -- Boris Diu, who's also a wildlife nut and amateur photog. He apparently plays for Charlotte currently and was briefly (30 minutes) traded to Toronto last year. He’d love to play for Toronto since he’s a big fan of Canada, and of course the proximity to Montreal and Quebec. And boy was he tall! Yugdeep told me they had a couple of young US girls at the lodge that weekend, who didn't have any tiger sightings, but weren't upset at all, cause they were so excited to see Boris. 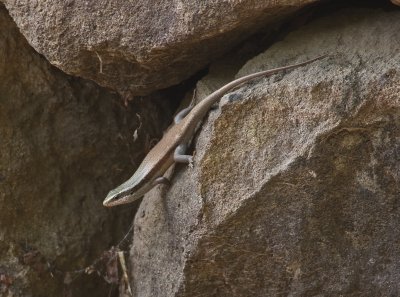 Thursday's drive was quiet throughout the park after all the rain. No sightings that we heard of, but new to me was a brahminy skink, yet another monitor lizard, a mating pair of Serpent Eagles flying acrobatics above and finally caught a greater racket-tailed drongo in flight, though not to well. Also only had one racket-tail. Oh well, good to have goals to keep working towards. Yugdeep and various forest guides have been working hard trying to get them for me, but they’re so friggin fast and easily scared away. 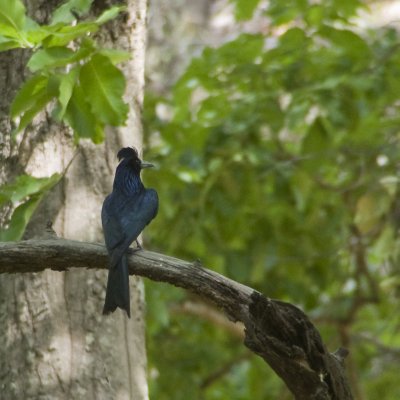 Racket-tailed Drongo, minus the racket-tail 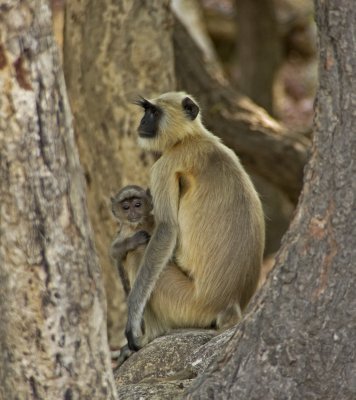 On our last drive we traded in our Tala tickets for the Mugdi zone. Saw some beautiful lillies that come out briefly after the rains. Heard the brain-fever bird everywhere – it’s the common hawk cuckoo. So sad to end my stay here, and had such a wonderful time with Yugdeep. He let me drive the Taj jeep back to the lodge too! The jeeps are massive, and the sun was setting. Took about twice a long to reach the lodge, and was pretty funny seeing the double-takes from other drivers and folk on the road. Fun fun fun!!! 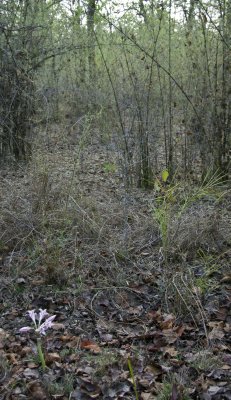 And then back to Delhi for my last week with Lynn and Remy. Lynn looks after the Canadian High Commission dog when the family is away, and we moved into the Canadian Official Residence! which was kept low-key while she was staying there. Was a pretty wonderful experience to live here. So beautiful and very different from the only other time I'd been there during the Thanksgiving Ball. 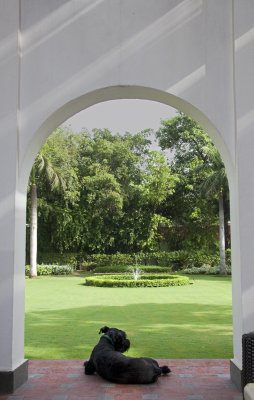 Backyard of the OR

So now I'm busy planning the next trip, and working on 'officially' taking people on escorted tours. My focus is obviously wildlife, but, have managed to visit pretty much all the major tourist sites in India over the last three years. In late November I'm planning to visit Gujurat and try to see the lions of Gir -- the last population of Asiatic lions in the wild. As well as go birding in the Rann of Kutch, and of course visit Panna and Bandhavgarh again. The rest is still in the planning stages. So exciting!