Whew, lots to get through before heading off to 3 brand-new-to-me parks in Madyha Pradesh tomorrow morning at 5am. So, off to the first part of
last month.

My girls arrived safely in Delhi, and 1 hour ahead of schedule, late Friday night on the 25th. Took them on a whirlwind shopping tour of Delhi all day Saturday, followed by a Mongolian Barbeque at the Canadian High Commission that night. Sunday was a more laid back affair, with Champagne brunch and then a trip to see Mr. Mogha, our fav jeweller.

Early on Monday, we set out to Amritsar on the train – first time for Sandra, who has traveled with me to India once before. Traudi and Kathleen are making their inaugural visit. You forget how different everything is here after spending a lot of time in Hindustan. So much fun to watch their reactions to everything – rather like watching children discovering the world. This is a wonderful experience to have later in life. You forget how wonderful, enchanting, mysterious, and sometimes scary the world can be when you are in your familiar environment. Totally invigorating and enlivening.

This was my first visit to the Punjab, not really counting the brief stop in Pathenkot on the way to Dharamasala in 2008. You can definitely see the agricultural focus as the train meanders through lush green fields of wheat and other crops. Interestingly houses are often topped with massive statues of birds and soccer balls and occasionally airplanes. Apparently these are water tanks, with panache!

We stayed at a lovely hotel formerly a 250 Raj era house. Beautiful terraces, trees and gardens around every corner. There were so many secret spots to sit with our chai or drinks or just to chat it was fun to explore. Loads of birds too, as I tried to coach the girls to recognize the calls of a lapwing or brown-headed barbet and later astound the park naturalists  Who are reading this now, and the cat is out of the bag! 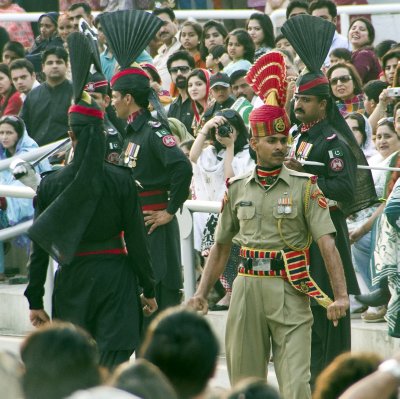 Pakistan (in black) and Indian (in khaki) Soldiers

That evening we drove to see the comical posturing ceremony at the Wagah border – the only road border crossing between Pakistan and India. Of course we got added to a few Indian family photo albums leading up to the sunset closing of the gates and lowering of the flags. Before the main event, people would line up to take a huge flag of India and run with it up to the gate and back. Their faces were so full of excitement and joy, it made you smile. A really tall fellow in a white tracksuit was organizing the flag running, as well as leading the cheers and chants. 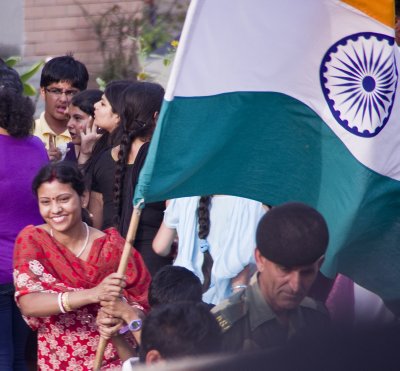 Running the flag at the Wagah Border Ceremony

Just before the ceremony started, Bollywood songs filled the area and young girls began dancing in the centre pathway.
Finally the very good looking and crazily tall soldiers took centre stage. Starting with a soldier letting out a long note that he held as long as possible, while a soldier on the Pakistani side did the same, trying to outdo each other for endurance. Then two Bollywood-worthy beautiful women soldiers led the march to the gates – the idea being that India cares so little about Pakistan, that even their women are braver than the Pakistan soldiers. Wonderful goose-stepping, pirouetting, flag-line twirling extravaganza and the gates finally were closed. 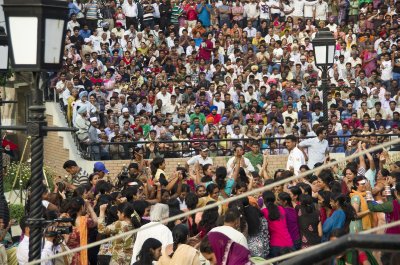 We then tried to leave! Yikes!! First time I’ve experience the crush of a crowd like that. Reminded me again why I prefer a jungle if push comes to shove, and I mean that literally in this instance. Still managed a timely exit, stage left, and then rapid walk back to our car, which got us on the road before most of the masses, since Indians don’t generally tend to walk fast. We felt like we were cars in Delhi, weaving and darting through the crowd, often with millimeters to spare, seeking any opening to slip through. 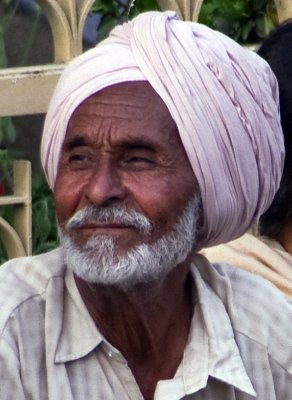 The next morning we walked to the Jallianwala Bagh. A sobering memorial garden that saw one of the most pivotal events leading up to India’s independence. What happened here not only outraged the country, but the world as well. In 1919, there had been many demonstrations against the increasingly restrictive British Raj. 2000 people gathered peacefully in this space, enclosed on nearly all sides with only a narrow alley way leading into it. General Dyer was sent to disperse the crowd. He ordered them to disperse, which of course they were unable to do, since he and his troops filled the alleyway, so he ordered the soldiers to open fire. At the end of the massacre, 380 lay dead, and a further 1500 were wounded. 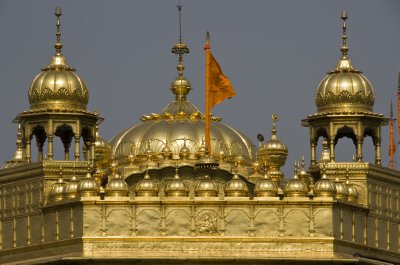 The gold in Golden Temple

After the gardens, we walked to the Golden Temple. The heart of the Sikh religion and an incredibly inspiring place. So beautiful glittering in the middle of a massive fish-filled sacred pool. 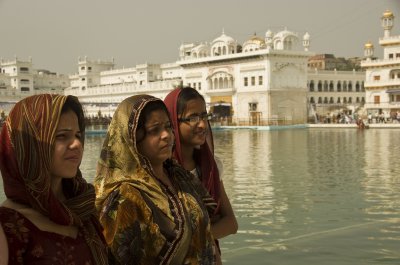 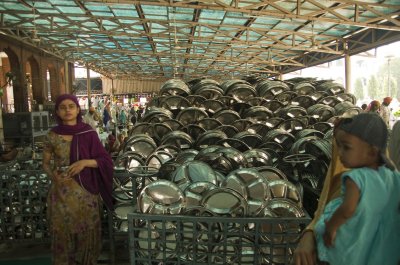 Handing out thali plates in the Golden Temple kitchen

Most amazing to me though were the kitchens. Anyone come here and eat for free here, regardless of race or religion. A meal of dal, veg, chapatti and chai, as well as rice and sometimes a sweet. 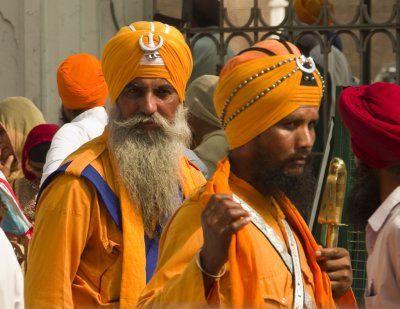 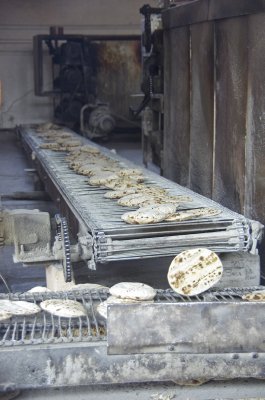 Prepared solely by volunteers, they feed 40-500,000 every day, 24 hours a day. In one room, groups of men and women were peeling mounds of garlic and onions. In another, massive pots filled with dal and rice. Pickles gathering flavours in large tubs. Men using a hoe to stir rice; thali plates stacked for washing higher than the people washing them. Unbelievable coordination and operation. All Sikh temples have a similar, though smaller, set-up. 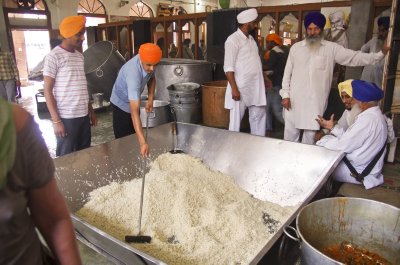 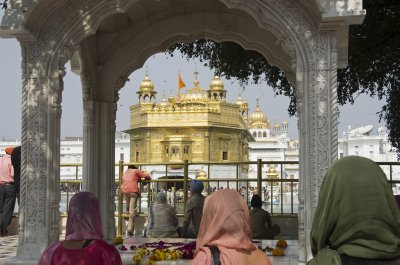 Next day we were off to stay with my friend Sylvie in Chandigarh. Which was very lucky since unbeknownst to us at the time, we would not have been able to find a room at this inn anywhere. Pakistan was playing India in the stadium just down the street from us, in the World Cup cricket semi-final. The importance of this is hard to describe. The nearest I can come to would be to say US vs Canada in Olympic Gold Medal Game, times 100. Luckily India won, so the celebrations in the street were very festive and there were no major issues. The fireworks, firecrackers, drums and cheering were heard to the wee hours of the morning. 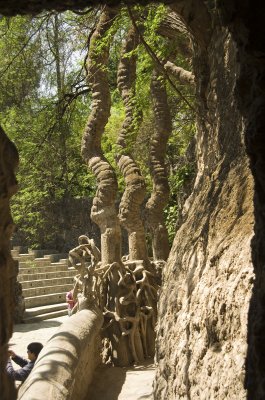 We took a brief tour of this beautiful city, with 50s-style French Mediterranean houses and neighbourhoods, massive and beautifully gardened round-abouts and all laid out in a very structured sections. Then we spent a few hours gasping at every corner as we explored the imaginative Rock Garden, created by a civil engineer in his spare time. 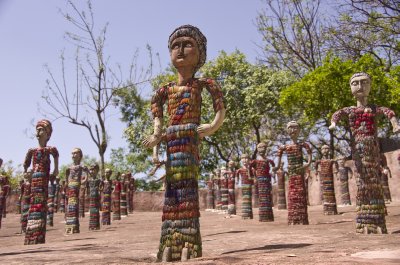 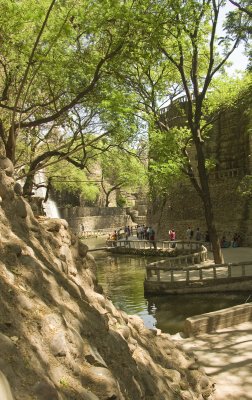 Nek Chand began the garden in 1958, building from discarded objects, working in secret. It was discovered in 1972 by workmen clearing space for city development and slated for destruction. Luckily though, the garden gained much support from the people and not only was it saved, but Nek was given a salary and workforce to expand the garden. Today it covers 10 hectares and continues to be developed and keep up to Nek Chand’s wonderful artistic vision. 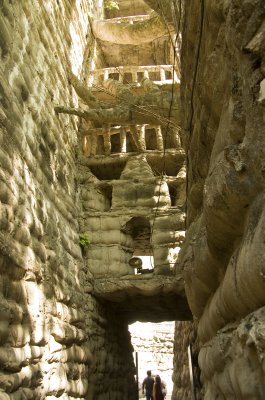 Back in Delhi for a fantastic and exhausting day doing a walking tour of Old Delhi. Along with Surekha Narein, our wonderful guide through the maze of alleyways in this part of the city, we started early to avoid the increasing heat. Jumping off the subway in Old Delhi, our first stop was joining an early morning Sikh service. The devotion and spirituality at all temples is inspiring. As we left, we received a blessing and a scoop of halva – a delicious semolina, ghee and sugar paste. Off to the Hindu temple next and finally a Jain temple. Was a bit startling to come face to face with 2 naked men as we quietly walked through the Jain temple. There are 2 main sects of Jainism, Svetambar and Digambar. Digambar literally means ‘skyclad’. They don’t consider themselves to be naked, but rather wearing the environment. A tad shocking in a country where nudity is taboo.

We then went off to the Red Fort, stopping for some delicious street samosas on the way. After all my cursing of VIPs, that’s exactly what we ended up being this day. Surekha was able to take us into areas closed off to the public. Under being repaired or closed because of vandalism – people are prising the semi-precious stone inlays out of many of the beautiful places here. Pretty special to get into the Pearl Mosque, King’s chambers and Hammam (or bathhouse). Exquisite workmanship. 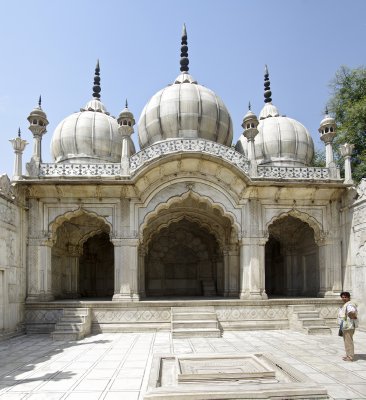 Pearl Mosque in the Red Fort

After we left the Red Fort, Chandni Chowk was packed with people so we hopped onto a cycle rickshaw and threaded through the narrow pathways and streets. Constantly sure that we were going to clip someone’s ankles or toes. I’m not sure how we didn’t. We travelled through the wedding area – Kinari Bazarre, through the car parts market and to the silver market. Here we hopped off and darted down an alleyway that passed through someone’s house! to cut through to the other side and pick up another cycle rickshaw to go back to the Metro. As we approached, we got stuck in a traffic jam so we hopped off and darted our way through the people, goods, scooters, carts, dogs, cycle rickshaws and piles of stuff (some completely unidentifiable), until we reached the sanity of the very modern Metro.

A short ride later and we were serenely sipping, no, gulping, fresh lime sodas at the Gym Kanna Club, founded by the British in 1913. Rather surreal after our morning.

Exhausted and filthy, we returned to the relative serenity of Vasant Vihar for a hot shower and some quality puppy play time. Then off to have dinner that night at Olive Bar near Qtub Minar. Incredibly romantic place, with fantastic food. Where is Shahrukh Khan when I need him? And of course, India won the cricket world cup against Sri Lanka, so more celebrations and firecrackers filled the city. I think the girls’ heads are spinning a bit. Next trip, our 2-week tour of Agra and Madhya Pradesh. 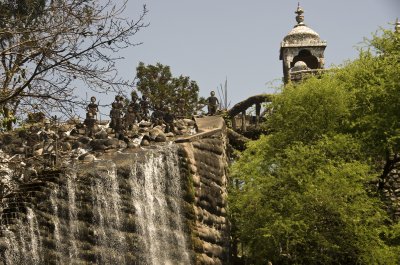 Posted by LisaOnTheRoad 08:58 Archived in India