Arrived back in India on March 11, and Lynn’s house is filled with puppies! Beautiful little Miss Sookie Stackhouse was anywhere from between 2-5 months old and was rescued from the street by Lynn with a broken leg. She was understandably very timid at first, especially since her leg had to be rebroken to be set. By the time I arrived she showed no signs of her tough start in life. Sweetest little girl, so loving and filled with energy, running all-over and sliding down the hall in her cast. She loved toys and promptly took all the ones I brought out straight to her basket. She was also very good with the 5 other puppies here (3 weeks old when I arrived). But, when one of us would put a toy in with the puppies, who are just starting to figure out how to do something other than eat, sleep, poop and pee, Miss Sook would watch it so intently, and at the first chance, dive into the blow-up puppy pool and retrieve said toy, taking it straight back where it obviously belonged – her basket! 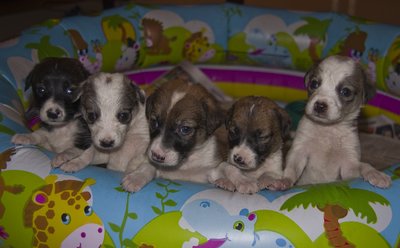 Typing this is so heartbreaking because while I was away in Corbett, Sookie very suddenly got sick, with what is thought to be an aggressive recurrence of distemper, that she must have picked up when she was on the street, and died two days later. It’s been a week now, and so far the puppies all seem healthy, but knowing how contagious it is, we are very nervous for them. 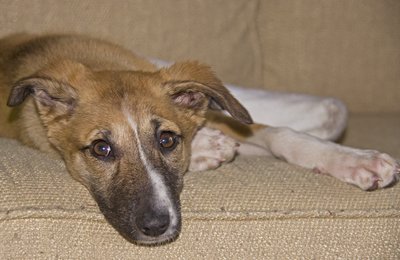 All in all, a lovely first weekend in Delhi: off to Ahujason’s to pick up a couple of pashminas for the cooler Corbett nights (yes, I do need more!); a fantastic brunch at the Hyatt’s TK; and, of course a visit to Mr. Mogha and the beauty parlour at the Meridian. Spent the rest of the time hanging out with Remy and dashing about town before finally heading to the jungle on Wednesday – Corbett National Park, about 6 hours north of Delhi.

Northern Zone looking across at our tented camp

Stayed at the Hideaway’s Riverside Lodge for 3 nights, which was wonderful and the food fantastic, but the trip River Retreat was the real adventure into the heart of the northern zone of the park. The lodge was a beautiful little tented camp where we were the only guests for the first night, so spoiled royally by the attentive staff. There’s no electricity in the camp, which made the night sky stunning, even with the full moon lighting the camp. Our ‘Commander’ Agam, who runs the camp, was so hospitable and interesting. He’s worked in a number of wildlife places and including a stint as a wildlife photographer. He spent 5 months photographing snow leopards for National Geographic (5 months, but as he said, was 5 months waiting, with a last minute lucky sighting and photography session). Over a billion people in India, and he was an alum of the same college as CV Singh, the wildlife guide I was travelling with, as well as many of the naturalists and lodge owners I’ve become friends with over the last few years. Small world! 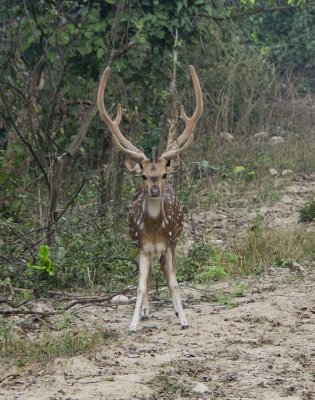 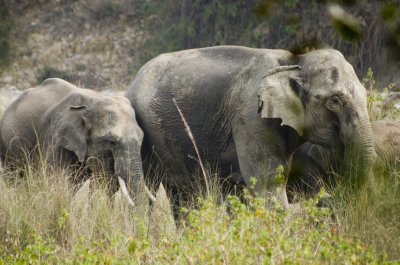 Our drives in the park were good, but no exceptional sightings, though with CV's help, managed to check off a load of new birds. Did see a lovely large herd of wild elephants and had fun watching macaque monkeys at one rest-stop. One youngster had stolen the rear view mirror off a jeep and was endlessly fascinated by his reflection. They are generally not-so-nice monkeys and can be very aggressive, unlike the langurs, but still fun to watch. The young ones especially have such funny old faces. 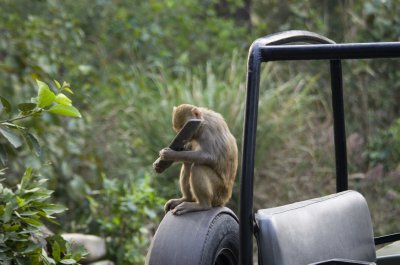 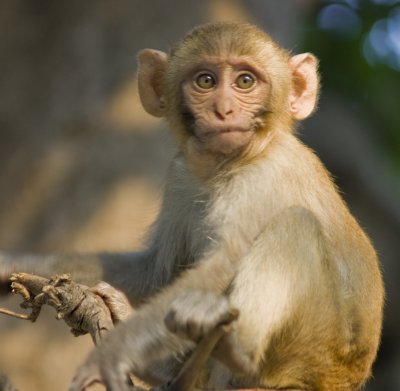 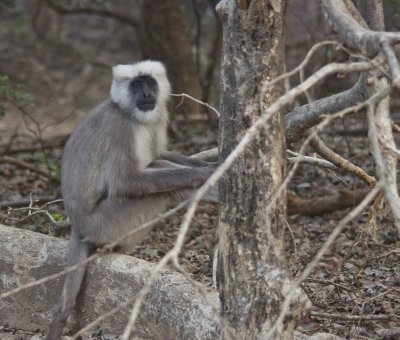 The langurs here are different from central India, something I didn’t notice on my first visit 2 years ago, being an Indian jungle newbie then. They’re much lighter in colour, with a large ‘mane’ and a flattish head. Also tons of barking deer this trip. Quite small deer, with a curious set of canines, leftover from the Jurassic period? They aren’t man-eating deer… I hope! 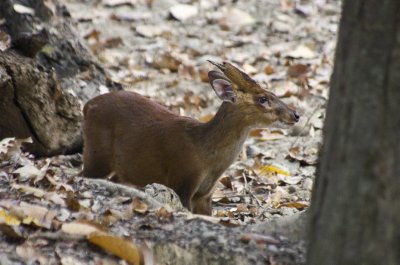 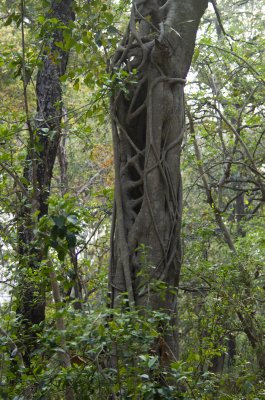 Strangler vine around a hapless tree

I love the old growth Northern Zone of Corbett. It meanders down steep valley sides, through weird and wonderful twisted strangler vines wrapping around massive trees, over rocky streams before reaching the Ramganga river valley. A beautiful Pallas Eagle nest with an almost grown fledgling sat on top a lone tree in the river stream path. Our tents were set overlooking the valley and beautifully quiet. You don’t realize how much noise electricity and modern appliances/air conditioners/heaters make till you experience the absence. 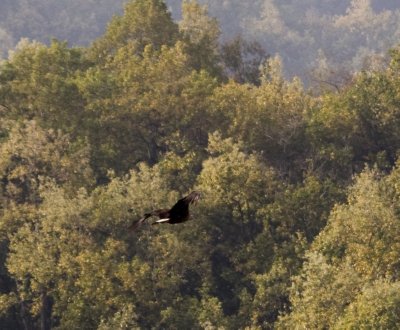 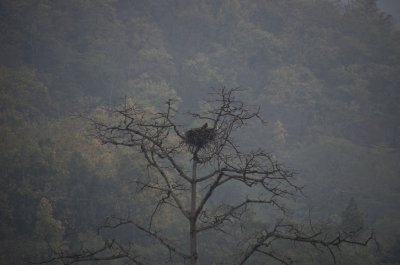 We took an elephant safari one morning, which Agam gifted to me for a birthday present. So kind. But the piece de resistance was fishing for the Mahseer in the river pools below our camp. Our fishing guide Raju led us down the often steep shale pathways (wasn’t looking forward to climbing back up, no longer being in the Incan shape I was in SA!) to two spots that were deep enough for the larger fish. Mahseer have a fearsome reputation among fishermen. They are really good fighters, especially the golden mahseer, and these certainly lived up to their reputations. They reminded me a bit of fishing for salmon in the Pacific, the way they would run the line, rest and then run again, just when you thought you’d finally be able to land it. They are also very smart fish. Our guide kept varying our bait, casting angle and numbers of hooks to keep them biting. Even so far as making our visibility on shore different. Really interesting, because each time something was changed, they would go straight for the bait, but the second time using the same method, you could see the fish milling about the line, nibbling away, but no good bites. 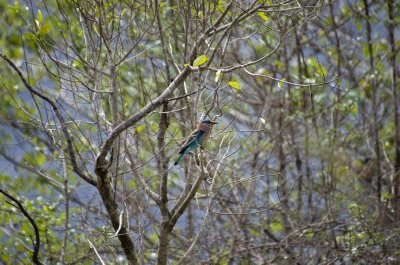 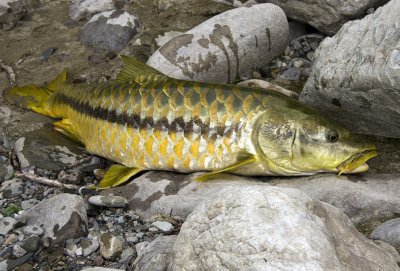 As we approached dusk, we had successfully landed 4 smallish golden mahseer, about 4-5 lbs, when the big one took the bait! Wow, what a difference! It took me 42 minutes to bring it in, and at one point almost all the line was in the river so we had to follow it along the rocky shore to keep it within line distance. As I was bringing it in closer to me, a wild goat (goral) and her baby appeared on the cliffside above us. Was a surreal moment, playing the line, and trying to get a glimpse of the goral, at the same time trying to set my camera up on automatic mode CV to take pictures of the fish, the goral, me… yikes! Completely spent, the poor fish was finally close enough to heave out of the water and grab a few pictures before releasing back into the river. Poor bugger! He just lay there in the water for a while, and I was a bit scared for him, but he finally got the energy to drift into the deeper pools. Such a beautiful fish! And apparently good eating, though boney. Every year I seem to say the same thing… but I think it will be really hard to beat this birthday! 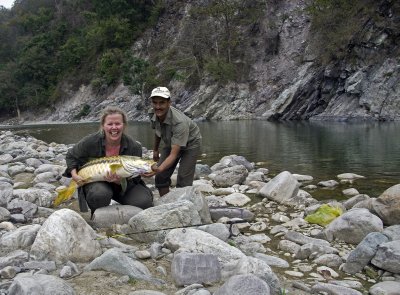 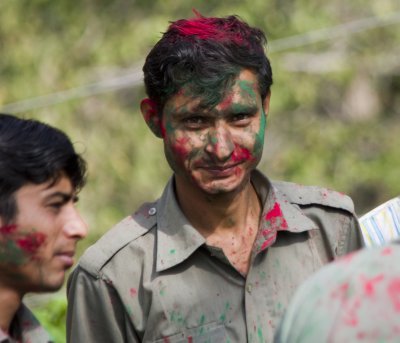 Holi in the jungle

It was Holi on the 20th, so nice to be away from the festival chaos in town, and there to take advantage of the full moon, which peaks on Holi. After our elephant safari, the staff included us in their Holi celebrations. Painted with wonderful colours and having Bhang, a very tasty Holi drink made with almonds, sugar, milk, masala and cannabis! Yum! Then, along with other snacks, pakoras of potatoes, spices and cannabis leaves! So smart, taking care of the munchies all in one go! Not too much of a ‘bhang’ tho – sadly I think they gave me the ‘tourist-strength’ version. 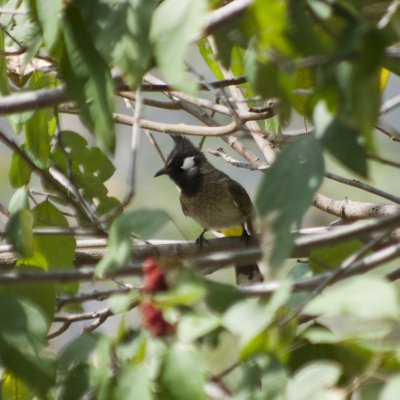 I think next time I come to Corbett, I’d head straight to this bit of paradise. 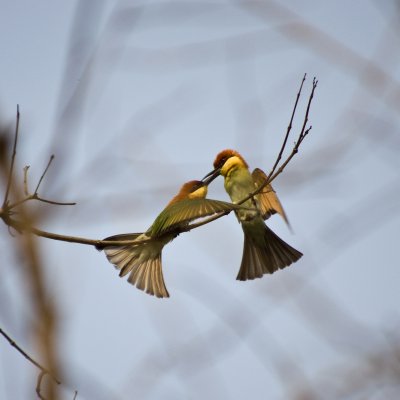 Chestnut-headed Bee-eaters having a heated discussion

Back in Delhi and the arrival of Kathleen, Sandra & Traudi. Did a whirlwind tour of Delhi and now on the train to Amritsar. Popped into a local ATM to get money for this trip and at the conclusion of the transaction was given the choice: “Get Money” or “Get Advice and Get Money”. Unsure I chose Get Money. Turns out Get Advice would have given me the receipt…. And maybe a little note? I could just see it… Lisa, do you really need to buy that pashmina? :-o