Gone to Goa At Last!

Easter on the beach and explorations in Panaji and Old Goa 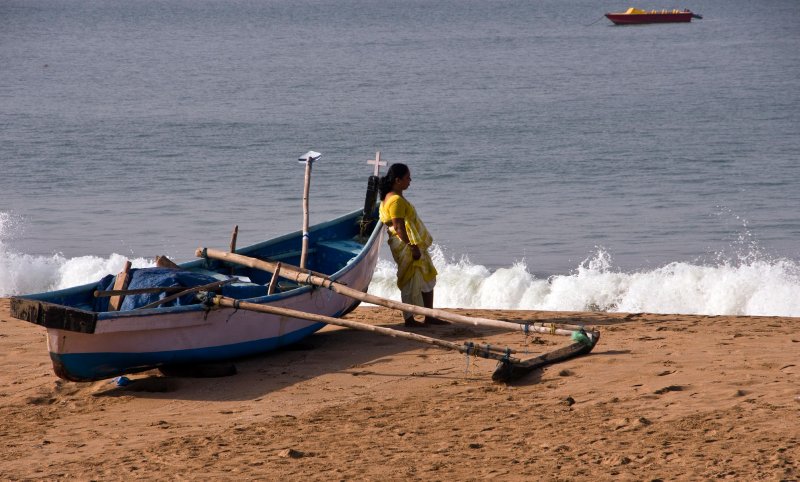 Lady looking out to sea on Bogmalo Beach

After 7 trips and close to 2 years travelling in India, I have finally made it to Goa. At last I will be able to answer yes to the inevitable question from almost any Indian I meet – “have you been to Goa?” I knew it was a very popular destination and had a fascinating Portuguese and Christian history, but somehow it never made it onto my ‘must see’ lists. Maybe because I’m not normally a beach person, and I perceived the culture to be centred around that? Maybe because its reputation for partying and drugs no longer seemed to be so appealing to me? Maybe just because everyone went and I was being stubborn? Not sure, but regardless of reason, Sandra and I were trying to decide where we’d go for the Easter break when Laura and Colin, friends from the British High Commission, said they were heading to Bogmalo Beach, to the Coconut Creek Resort (http://www.coconutcreekgoa.com), and we decided to finally take the plunge. 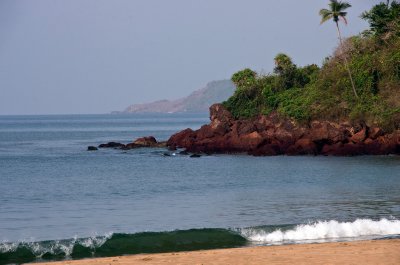 With no AC rooms left at the lovely Coconut Creek, we opted for the cheaper – and right on the beach – sister property Joet’s Guesthouse. Bogmalo Beach is quite lovely, with wonderful crashing waves and waving palm trees. Each day we’d trek up the path to Coconut Creek and hang out by the pool with the gang, lazily sipping Mojitos, and then rolling into the pool to cool off. 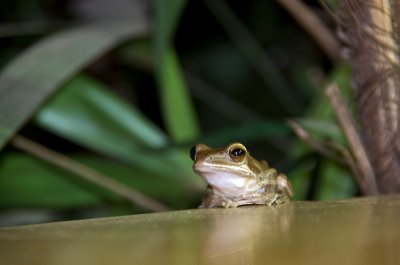 We were so glad we opted for AC though! Many in our group had rooms at the resort without AC. The temperature was pretty high, but not crazy; however, combined with the sultry humidity, sleeping was not so comfortable for them. One of the girls told me they would step into the shower, nightclothes on and all, and then go to bed wet under the fan – apparently that worked quite well. 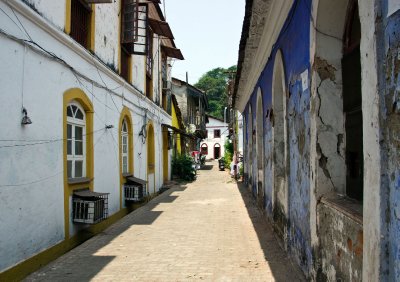 Streets of Panaji in the Latin Quarter

Joet’s Guesthouse has quite a good reputation for food, and the open-air restaurant, on the beach, is a wonderful spot. Unfortunately, we had dinner there with our group of 16 and probably because of that, we weren’t overly impressed. Still, one of the highlights in Goa was the fabulous, spicy and affordable seafood and we started our taste adventures here.

Heading to the capital ~ Panaji 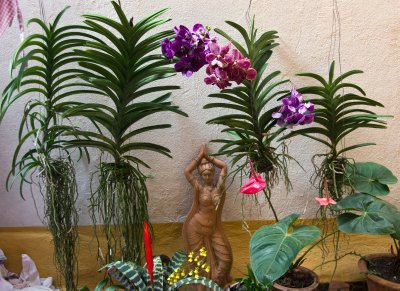 After 3 nights and days just hanging out with the gang, we were off on a short drive to the capital city of Panaji (or Panjim). We stayed at an amazing little homestay on a leafy street in the old Latin Quarter of Fontainhas called Afonso Guesthouse (afonsoguesthouse@gmail.com). It was also only a 15 minute (albeit sweaty) walk to the downtown area. The rooms were insanely cheap, super clean and comfortable. The family running the property were so helpful and friendly, arranging transportation for us to Old Goa and making sure we knew how much to reasonably pay for things – very sweet people. 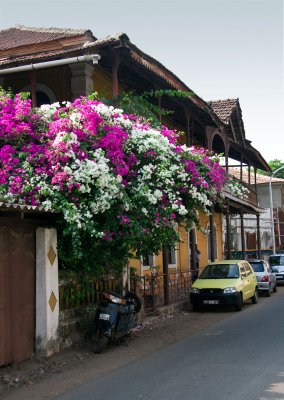 Beautiful bougainvilla in the Latin Quater of Panaji

Our first day in Panaji, we set off to explore the winding streets, and sweat some more, cause the system needed to be cleaned out after all those Mojitos! Located on the Mandovi River, and backed by terraced hills it is a very pretty town, with an interesting mix of architecture. 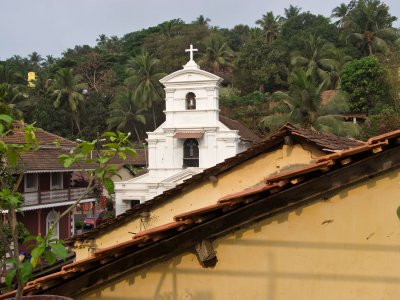 History in a nutshell: Panaji has a history dating back to the 11th century and the Kadamba dynasty. Most of the visible influences now though are a mix of Indian and the Portuguese who arrived in the 16th century. In 1843 it was renamed Panjim and became the capital after the previous capital of Old Goa was decimated by plagues of malaria and cholera. The new name meant the land that never floods. In the 60s the Indian government was forced to invade Goa to make the Portuguese leave. Goa rejoined India and was named Panaji once again. 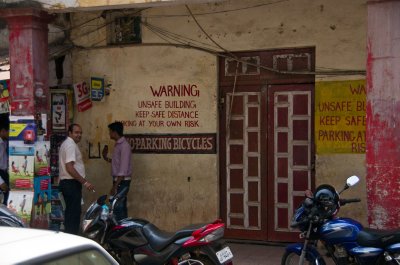 Maybe they didn't do well in English studies?

Finished in 1541, the Church of our Lady of Immaculate Conception sits at the head of the downtown core and overlooking the main square. This was the first stop for Portuguese sailors arriving from the home country. They would come here to give thanks for arriving safely before venturing further into the lush continent to Old Goa. 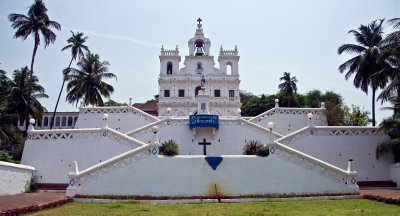 1541 Our Lady of the Imaculate Conception

After traipsing around town, dripping steadily, and trying in vain to find a restaurant described by locals as the Best in town – the Ritz – we settled for the blessedly freezing, delicious, but not-Goan, Sher-E-Punjabi restaurant. 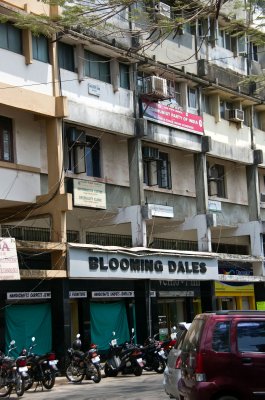 Who knew Bloomingdales had franchises in Goa?

Day 2 and we took a car about 40 minutes away to the World Heritage site of Old Goa – that at one time was called the “Rome of the East” and had a population more than London or Lisbon. The drive was spectacular and reminiscent of Kerala. Beautiful, lush, dense vegetation on a winding road, with lovely little houses – some old Portuguese, others a whimsical mix of Indo-Portuguese. 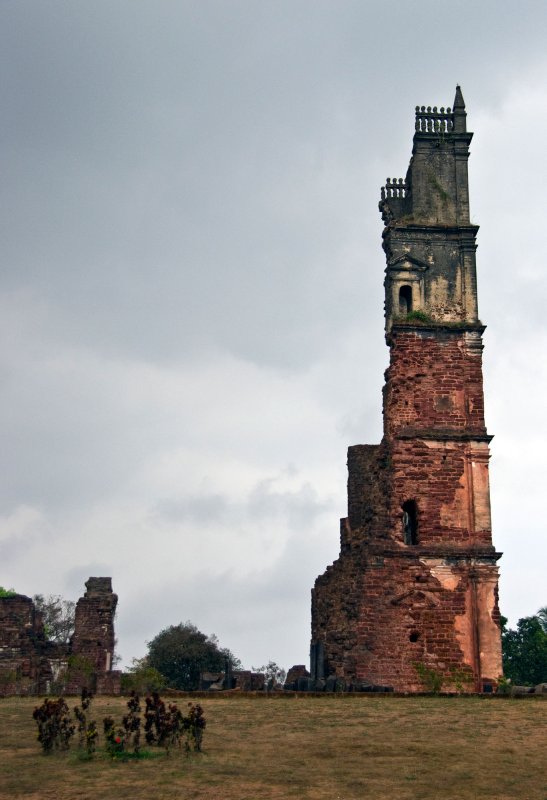 Our first stop was at the very atmospheric ruins of the convent and Church of St. Augustine founded in 1572. A movie was being filmed there, so we watched that for a while, before they quickly packed up and we could wander at will. The only major structure left standing here at the massive site was the belfry tower. During one of the repressive regimes of the Church, many orders were dismantled, including the Augustine’s and the church was ordered abandoned in 1835, which started the neglect and decay of this massive building. The weather was bright but grey, which only added to the fabulous feeling of the place. We spent a long time strolling this magnificent site, and it was my favourite spot in Old Goa. 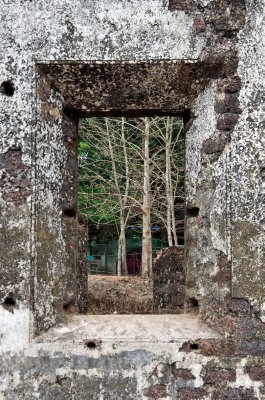 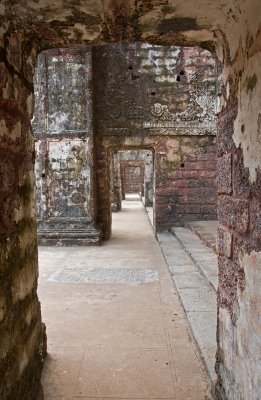 Across the road, and fronted by massive bougainvillea’s was the 1627 Church and Convent of St. Monica.

The most revered Church in Old Goa is the Church of Bom Jesus, which was begun in 1594. It was the first church in India to be made minor-basilica. Not sure what that means, but sounds important!

A nice baroque-style church, the most fascinating thing for us was the tomb of St. Frances Xavier, the patron Saint of Goa. It is rather strange to look onto the visible remains of the Saint, resting in the heavily decorated glass, silver and gold casket. All the remains except for his finger that is, which is kept in a crystal urn and taken out on December 3, the day of the Feast of St. Francis Xavier, to be displayed to the public. This is done once every ten years, the last being in 2004 and the next 2014. Until recently, people were able to actually kiss the feet of the remarkably preserved Saint at this festival. The exposure though caused a lot of damage to the body. Apparently one an overly-devout attendee bit off the toe of the Saint, and it reportedly gushed blood! 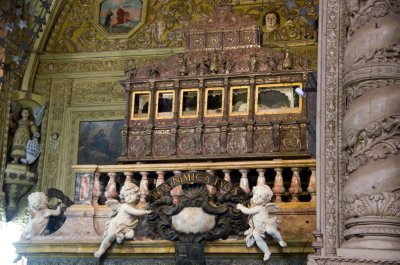 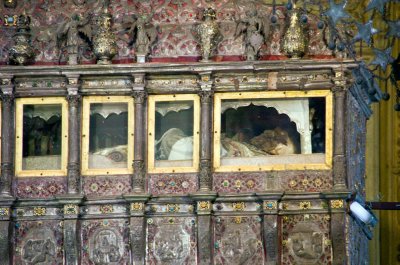 St Francis of Xavier in his glass-fronted coffin

The Saint’s remains are said to have powers of healing. This is rather ironic, since in 1554 he was also the instigator of the Inquisition in Goa by writing the Pope to request that the Inquisition come to India. It did come, with typically horrific results, but in 1560 after the Saint had tied in 1552 on the island of Sancian, awaiting permission to enter China. The Inquisition didn’t formally end till 1812 in Goa!

The Se Cathedral of Old Goa is the largest cathedral in India, and apparently Asia. The first building was built in 1510 and dedicated to St. Catherine. The 2nd building was begun in 1515 and gained cathedral status in 1538. The current structure was completed in 1564 and is the seat of the Archbishop of Goa. 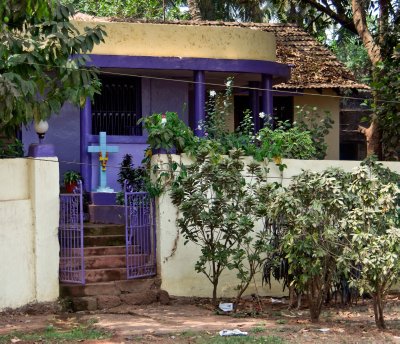 After traipsing (and did I mention sweating?) around Old Goa, we made a stop at a spice plantation and then back to Panaji for a wonderful meal at Viva Panjim, one of the most recommended restaurants by travellers in Panaji and literally around the corner from our hotel. It had mixed reviews about the level of service, but we must have had a good night because if was friendly and relatively efficient. The outdoor seating is set up on either side of an alley, and we had to squeeze in as the odd motorcycle drove through the middle of the tables. The food was very good, and amazingly cheap, given its popularity with foreigners. The two of us had: prawns balchao (lemon, chilli curry), garlic calamari, chicken xacutti (spicy curry made with roasted grated coconut), rice, Kingfisher beer and for desert – bebinca, a dish baked in layers of flour, jaggery, ghee and coconut milk. Total bill? Under 500 rupes – $10! Yummy!! 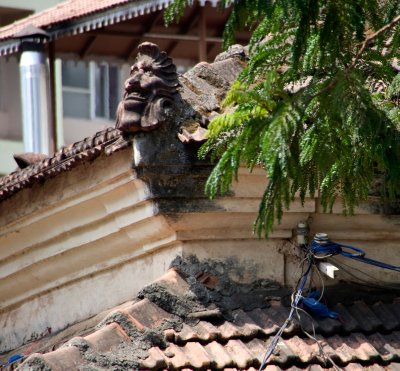 Sculptures on an old Portugese house in Panaji

The next day we were leaving in the afternoon so made another attempt to find the Ritz Classic restaurant for lunch… and we were successful! This was the best meal we had in Goa and were the only foreigners in the packed space. So amazingly good as we indulged in a mutton xacutti, a goan fish curry and prawns vindaloo. Great way to end the trip.

So we finally tasted Goa, and really, for us it was the highlight. Goa is very nice, and the history fascinating, but don’t feel the need to return I often feel in other parts of the country. Wouldn’t say no to returning, but just not overly enamoured. The best of Goa for me was the wonderful and affordable food. This, come to think of it, is a pretty compelling reason to come back actually!