Returning to Gujarat and Heading Further into the Kutch 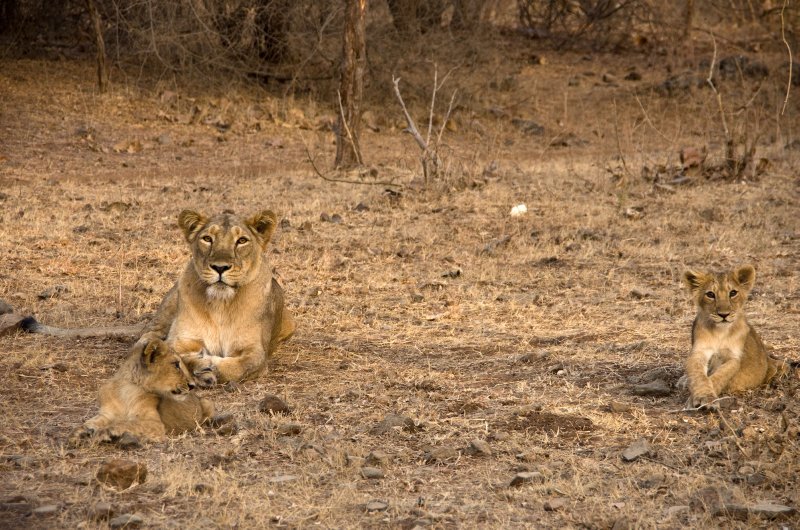 When last I left you we had wrapped up a wonderful Rajasthani adventure and were heading to Gujarat. To get their we took a Volvo bus trip from Udaipur to Ahmedabad. I know it's not indicative of all Indian bus trips, but it was my first and wonderful! Very nice bus, 5 hours downtown-to-downtown, two Bollywood flicks - one good and one bad -- and only 300 rupees! Was fun to watch the movies and we were pretty much able to figure out what was happening through most of them even without subtitles. It was easier to follow the better drama than the pretty bad comedy.

On the Road: Mickey-Mouse-eared Buffalo enjoying the mud bath!

Only had a night in Ahmedabad this trip, just a quick sleep at the very affordable and decent Accolade Hotel then off to Sasan Gir for 4 nights, with a quick but important stop in Rajkot for our alcohol permit and supplies! Funny how important having access to alcohol becomes when you are 'forbidden' to have it. As a friend pointed out, would probably drink far less if it wasn't forbidden. As it was, we picked up a bottle of whiskey, Hercules rum (yum), gin, cognac from duty-free and a mickey of vodka, plus 6 cans of kingfisher beer. For 3 of us over 10 days! Far more than we'd normally drink - honestly - and even had some left over despite our very sincere and impressive efforts (no leftover cognac though). Interesting to note that for this trip at least, it was far more pleasant to get our permits in Rajkot than the shame-laden permit process in Ahmedabad last November. 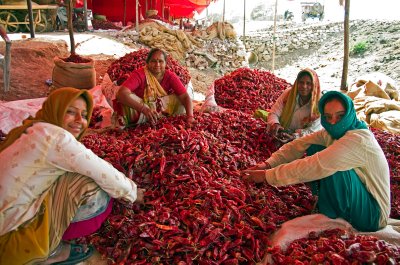 On the way, we stopped at the side of the road in Jetpur to check out masses and masses of dried chillies grown in surrounding farms. They were lovely people, with wonderful smiles and fantastic lungs. We were coughing from airborne pepper dust as soon as we started the climb down to see their produce. All kinds and sizes of chillies, including one of my favs – Kashmiri. 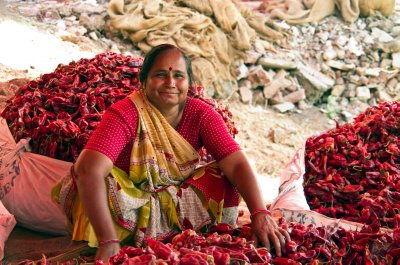 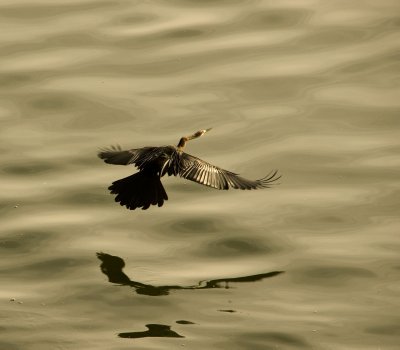 Snakebird takes off over the water

Finally arriving in Gir, the differences in the vegetation immediately apparent from last November. As expected it was so much drier, hotter and bare. The fallen teak leaves that formed a thick crunchy carpet were mostly gone, disintegrating into the forest floor. 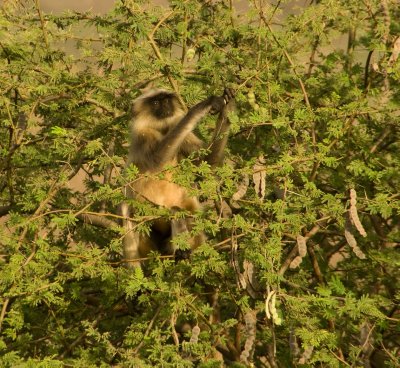 This trip we decided to check out the Gir Birding Lodge. The setting was lovely with little cottages set in a large mango orchard. Lovely and quiet with just 6 cottages on the property. The only negative for the lodge was the lack of a dedicated jeep and driver, instead using a roster system of jeep drivers from town. This makes it the quality of jeep and driver uncertain and inconsistant. It's usually much better having one driver employed, or contracted by a lodge. It generally ensures a better quality of ride and knowledge as well; a consistent driver gets to know the client, what they are interested in and where they’ve already been, more likely ensuring a better experience. So while Gir Birding Lodge provided cleaner rooms, far better food and generally more helpful and consistent staff, Anil Farmhouse’s resident naturalist/driver Haneef makes it hard for me to decide which would win out for the best place to stay of the two. Next time will have to try a 3rd place maybe? 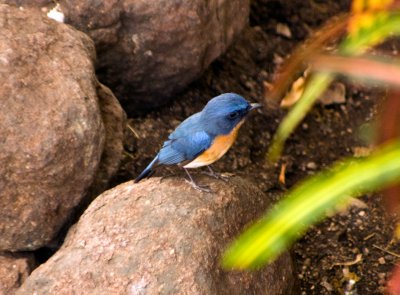 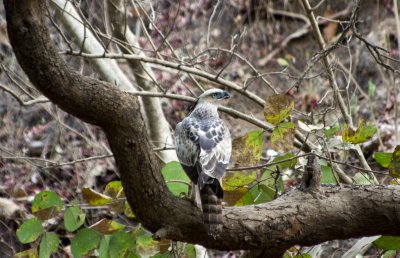 But on to the important stuff – the animals! As always, they are the stars! We had some fantastic sightings, though not as many lions as last November. It was explained (though not sure if true) that the lion rangers that control the traffic around sightings actually regularly 'herd' the lions up to where they can be seen. While we were there, there was a leopard not far away that had been killing children and many rangers had joined the effort to track it. Still at the end of our first drive, we had a spectacular sighting, coming upon a lioness and her two young cubs. It was just us with her and we had quite a while as her babies checked us out. Such a high! 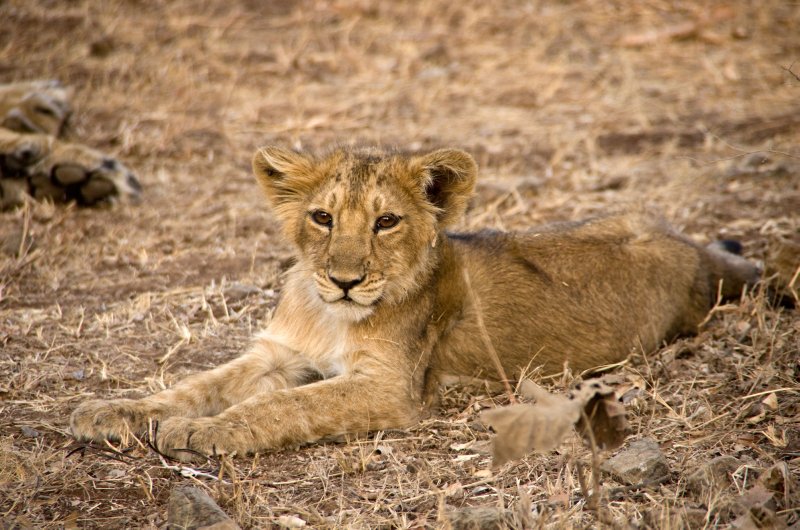 Posing for the paparazzi! 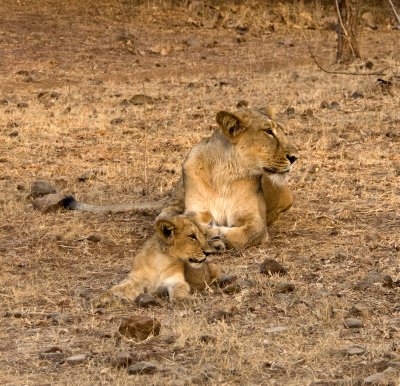 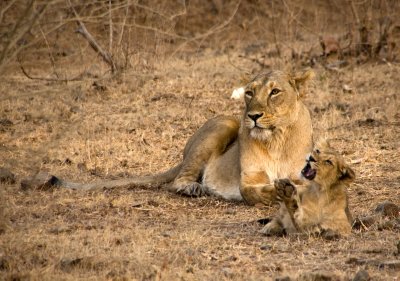 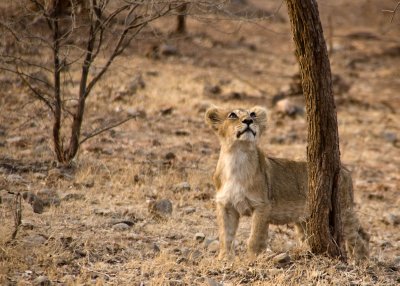 Checking out the scenery

This visit was also memorable for vehicle mishaps. We had a flat tire in the forest, had to give our spare tire to another jeep and shortly after visiting with a couple of male lions, broke down by a small stream! The driver and forest guide tried in vain to get the jeep going again before settling down to wait for a rescue vehicle and mechanic to show up. Sandra got her iPhone out and we boogied to Boney M while we waited, hoping the lions wouldn’t amble over to the rivers of Babylon!

Bhuj and the Kutch 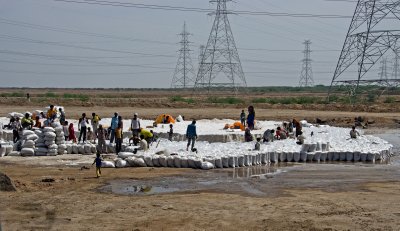 Salt farming in the Kutch 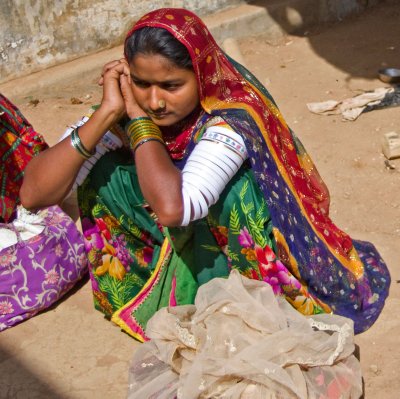 Beautiful colours and bangles in the Kutch

After Gir, we were off for a 7 hour drive to Bhuj and the Kutch. We stayed at the Kutch Safari Lodge, which has seen better days. It was pretty hot by now so wildlife was unfortunately not really on the table, but fortunately, the incredible crafts of the area was. We saw beautiful embroidery and textile work with incredible detail and art. Sandra picked up a vintage dowry bag, completely embroidered all over with geometrical and floral motifs. 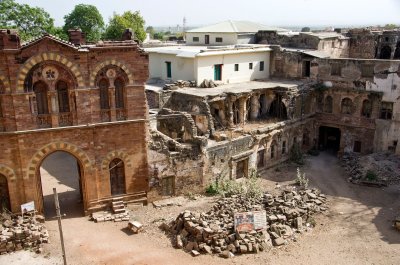 Remnants of the earthquake of 10 years ago still evident everywhere

We popped into the19th century Prag Mahal palace in Bhuj, which was strange in its very European architecture. The 2001 earthquake caused quite a bit of damage to the palace, and like other parts of area, you can still see evidence of this large quake that caused such devastation. The palace itself had some beautiful elements, but is in amazing state of decay, with roaming pigeons and rotting game trophys. Very atmospheric, but sad to see how badly it is being preserved. 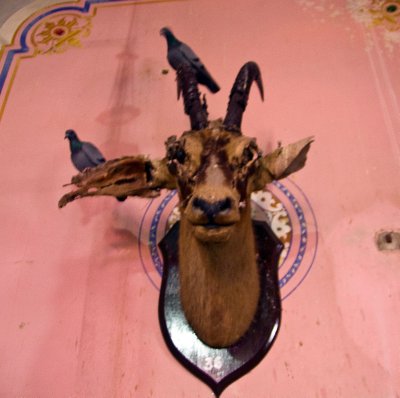 Careful conservation in the palace 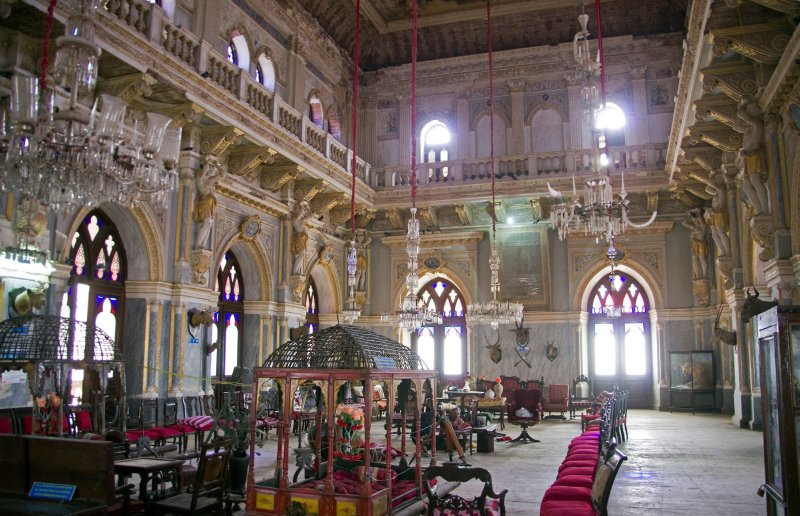 During our explorations, we stopped in a village – Nirona – filled with artisans hand-making all types of crafts. Of particular jaw-dropping beauty was the Rogan (or Roghan) fabric painting done by the Khatri family. The last remaining family to do this particular art form. The ‘paint’ is made from castor oil that is boiled to a careful consistency over two to three days. It is then mixed with natural substances to create the colours. To get the right painting consistency, a piece of gum-like paint is worked and warmed in the hand, until a thin string of colour can be pulled smoothly with a metal stylus and laid onto fabric in precise and intricate lines. Once laid down, the fabric is folded and the pattern rubbed and duplicated on the other side. You have about 20 minutes to create the duplication before the paint is too dry to work,so not a quick process. 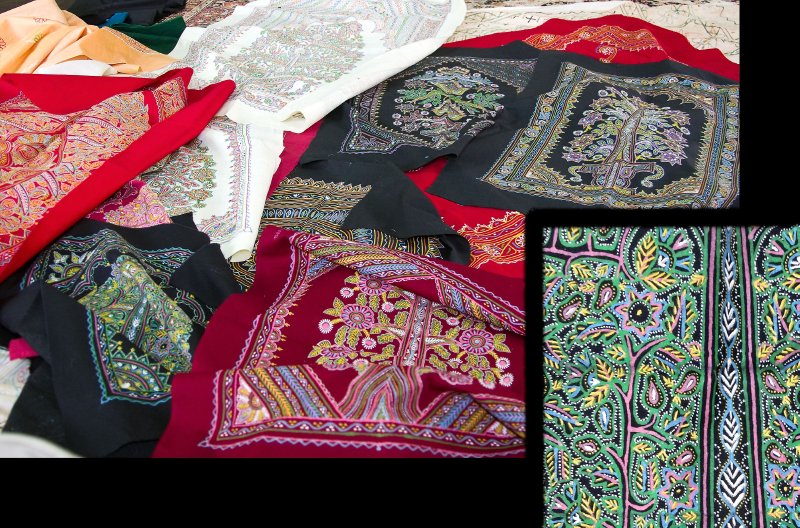 The art form has been done by this family for 8 generations and had nearly died out, because in its original form was a more basic patterned art to create saris. The painters couldn’t compete with the machine dyed fabrics and gradually disappeared. The Khatri family re-positioned the work as art, forming panels of increasing intricacy and difficulty. NO two patterns are the same and the only place you can get these pieces are from the family. So beautiful! 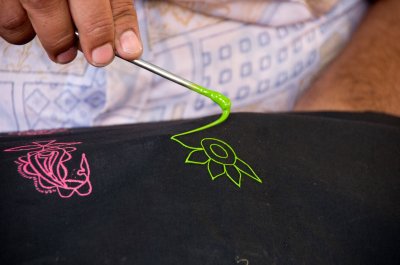 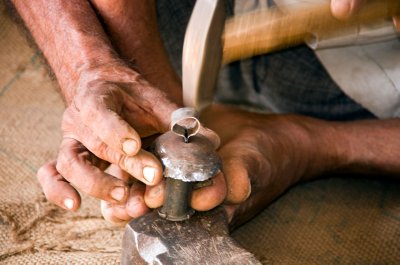 Making the copper bells in the Kutch - feet are very useful!

We also visited a fascinating demonstration of copper bell making by a lovely man with a wonderful face and brilliant smile. He deftly shaped, hammered, cut and formed the bells, proudly presenting us with the finished product. 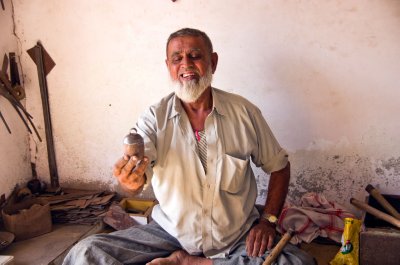 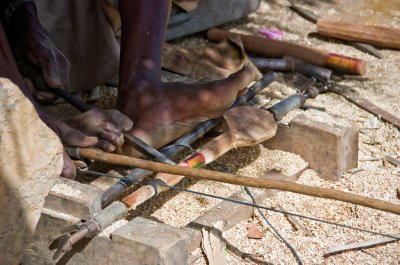 Finally we stopped into a wood turner, creating spoons and ladles, which he coloured with resins held against the spinning wood, creating wonderful colourfast patterns. We barely touched the work in this area of unique, colourful and talented communities, and it left me even more interested in the area than before. 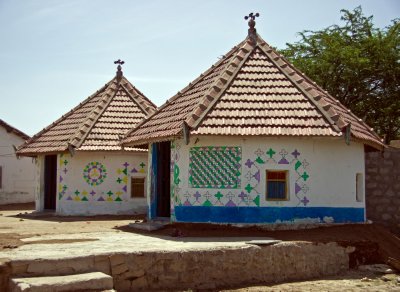 Village hut in the Kutch 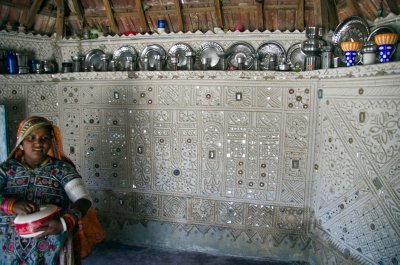 Mirror-work inside a Kutch village hut

We couldn’t leave without a quick trip to the White Rann, a seasonal salt marsh in the Thar Desert. You have to get a permit to enter this vast, white area with salt pooling in every depression, and strong hot winds driving into us. During the summer monsoon time, the area is flooded, creating winter habitats for flamingoes, cranes and other birds. 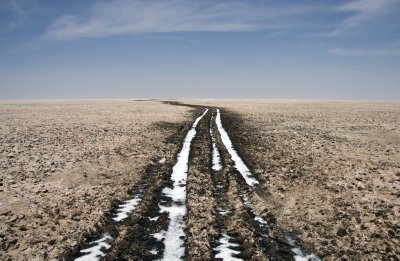 Salt collecting in the tire tracks in the White Rann

After getting our permit from very officious and self-important police officials, and driving past the military post, where the soldiers waved and smiled at us in a stark contrast, we reached the edge of the White Rann. Sadly, this beautiful, alien landscape was littered with familiar garbage and plastic. I left vowing to bring a garbage bag with me if I came again. 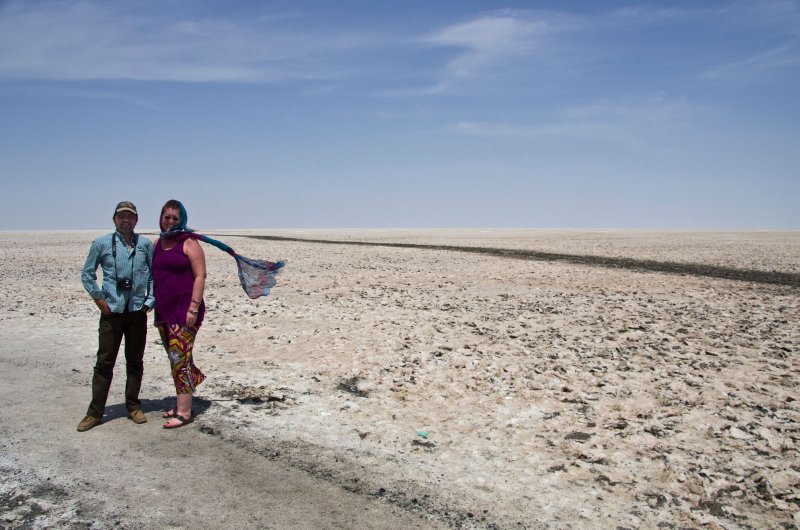 CV and Sandra in the White Rann

This trip ended like so many -- far too quickly and we were driving back to head to Delhi for a quick laundry and pack for my inaugural trip to Goa. On the way back, we had an unexpected Wild Ass sighting. Straying from the sanctuary into fields of cotton, were happy asses, rolling around in the fields of cotton. 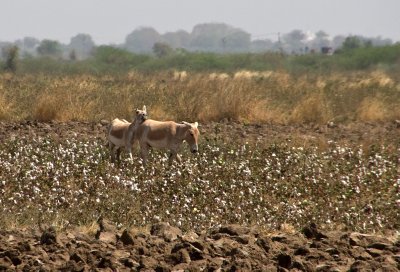 Wild Ass straying to the cotton fields in the Kutch

Chital speeding across the road in Sasan Gir

Posted by LisaOnTheRoad 21:54 Archived in India