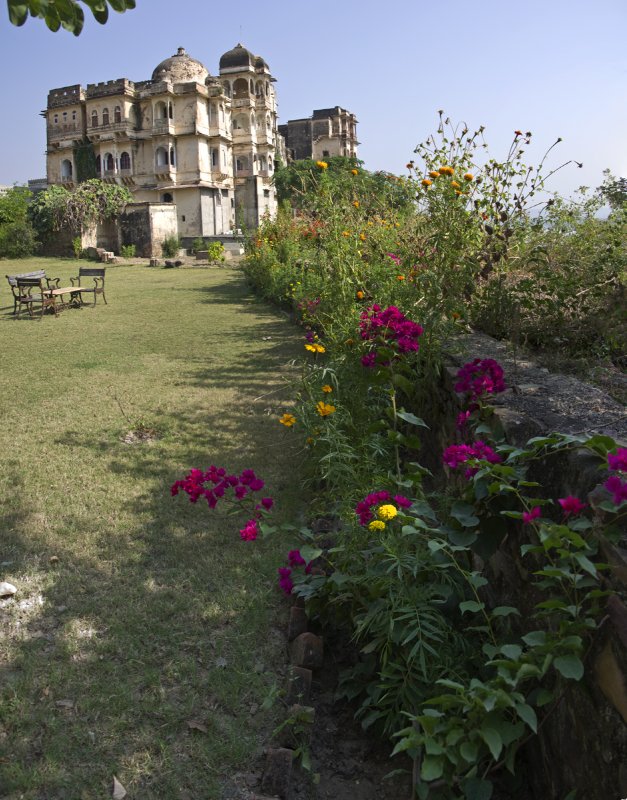 After an entire month in Delhi (the longest time I’ve ever spent in the city at one go) I was so happy to escape to somewhere you can actually and regularly see the sky! Flew at mid-day down to Udaipur for a quick trip to some lesser travelled places. Rajasthan is a major tourist destination and the state has done a good job making it that way, but on a 2-3 week trip to India, you usually end up doing a ‘regular’ travel route and missing some of the more beautiful and quieter, less-tout-filled spots so I was excited to expand into this area. 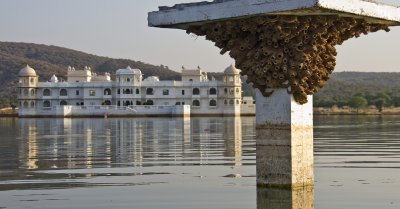 Our first stop was to the newly made Lake Palace Nahargarh, just outside of Chittorgarh on the road between Udaipur and Kota/Bundi. It’s a great and easy stop on a well-travelled route that lets you experience a Lake Palace at a much more affordable price than the heritage Lake Palace of Udaipur. Still, clean and spacious rooms with window seats over the lake large enough to sleep in and with screened windows on either side allowing the cool desert air to breeze across… at least in winter! and wonderful food. 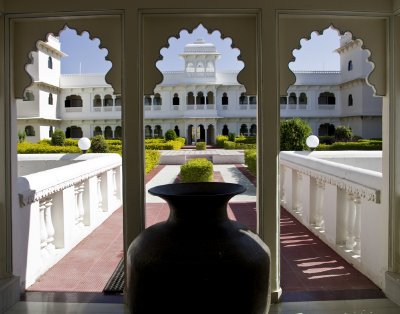 We hopped back into the boat to head off for a nature hike in the forest sanctuary surrounding the hotel. A pole in the middle of the lake was filled with a mass of streak throated marten nests. The construction was fabulous and looked almost like a giant wasp nest, with myriad tunneled nests created of spit and mud. On our way past we noticed a fledgling that was trying to stay afloat in the water. We rescued it and it laid gasping and shivering on our boat bench. Seemed to have most of its flight feathers, and disappeared shortly after we docked, so hopeful it has survived. 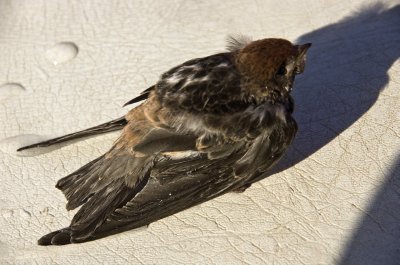 Fledgling rescued from the lake 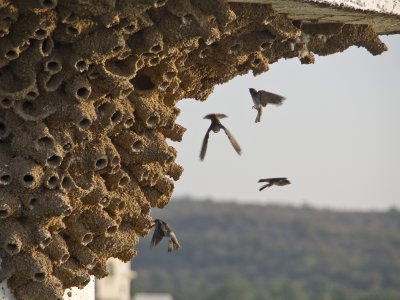 Bring food for the babies 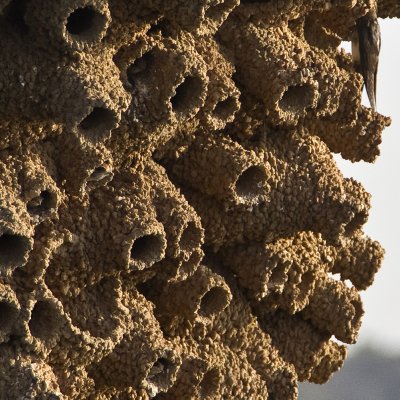 The hike was invigorating, if a little frenetic. Lovely scrub scenery, with shale and rock to clamber over. I was, what locals refer to (lovingly I'm sure!) us foreigners in the Indian heat, a walking tomato! And even if not, completely true!!! 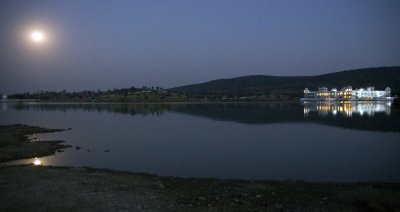 Moon rising over the Lake Palace 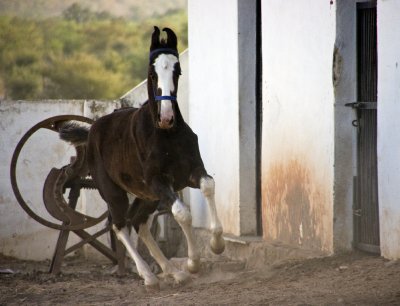 Rajasthani colt coming in for the night - this one's for you Barb! 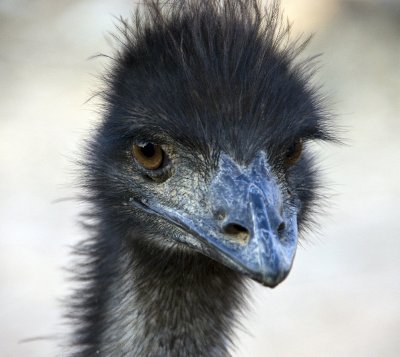 Also nearby was the Bassi Wildlife Sanctuary that we visited in the early hours. Nice to be in a forest again, and saw some pretty birds and lovely water spots. 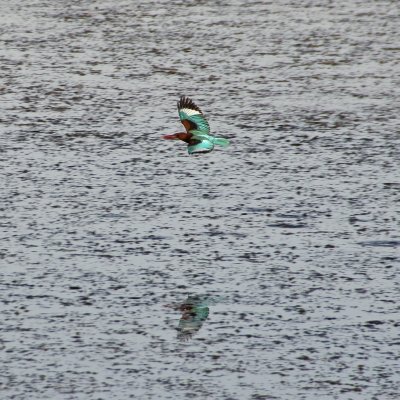 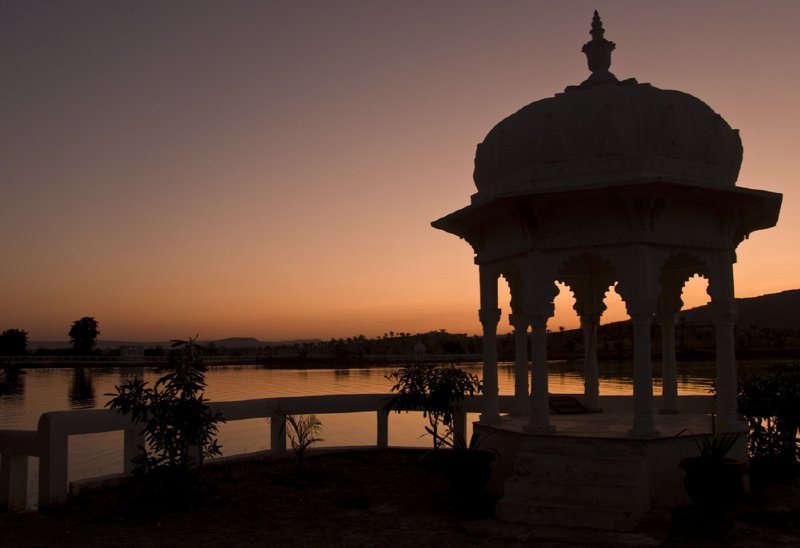 Dawn rising over the lake

Next morning we took off early for Bhainsrorgarh Fort, which is a heritage boutique hotel run by Rajveer and his lovely wife Madhu, as well as his brother. First though, we stopped at one of the lovely temple complexes you find all over India. This one, the Menal Temple had exquisite carvings, along the lines of Khajuraho, but less sophisticated. 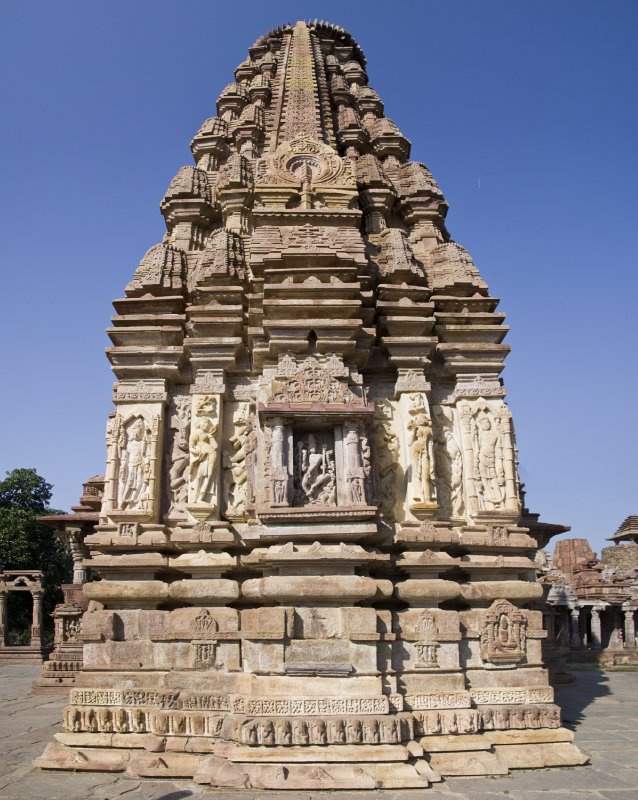 The temples are for Lord Shiva and date back to the Gupta period from the 10th century. Wandering on behind the complex, we came to a steep gorge, with water trickling down the sides to a green pool, surrounded by lush greenery and raucous parakeets cavorting across the valley below. The 12th century ruins of the mountain retreat palace of Raja Prithvi Raj Chauhan lay across the gorge from us. 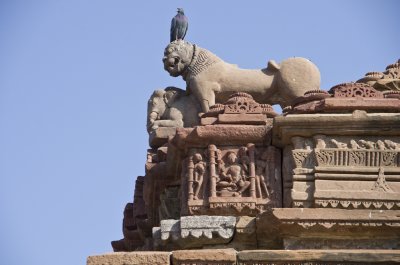 Lion stepping on an elephant!

Back on the road again and we arrived at Bhainsrorgarh to be greeted by our host, Rajveer Singh. After settling in to our rooms, we picked our way down to the river in the afternoon for a boat ride around the Chambal River, past the eerie and beautiful cenotaphs belonging to the family. This spot is one of the most beautiful places I’ve seen. Small, and shrouded in trees, with stone cenotaphs rising from the sloping slides to the river. It was so atmospheric and filled with a sense of mystery and times past, I felt like just sitting there. It’s hard to describe places like this. For friends I’ve taken to India, it reminds me of the feelings the area of the reclining statue of Vishnu in Bandhavgarh – Shesh Shaya brings. As well as others like Machu Picchu at dawn. Places that pull you out of the moment and fill you with peace and introspection. Also, a great spot for a movie scene Chris! 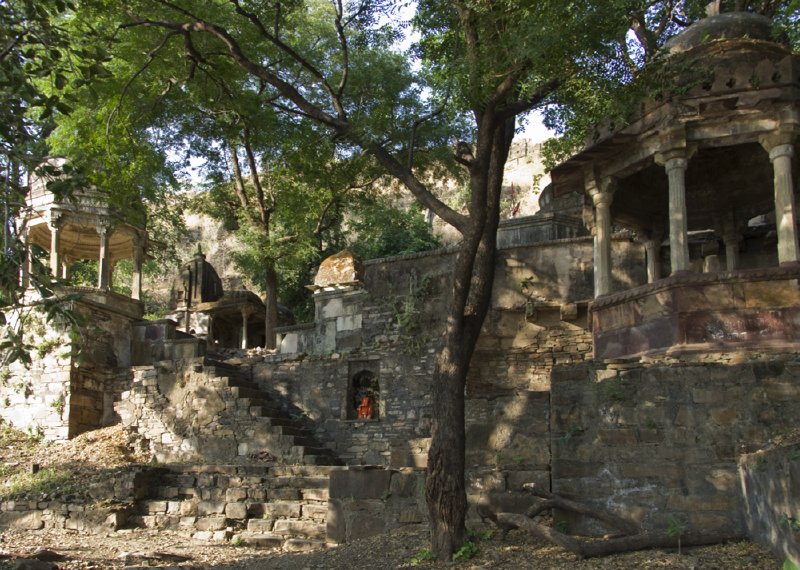 The beautiful and serene family Cenotaphs

Our boat was a handmade affair, with rough-hewn planks nailed together to form a wide, flat-bottomed boat. This seemingly unwieldy vehicle took us around, powered by two small Indian men, with oars made of well-worn flat-plank paddles attached to relatively straight tree branches and held to the boat by twisted rope loops. A hell of a job! 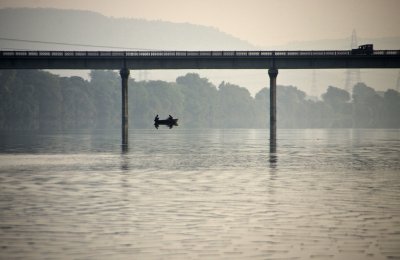 Fishermen on the Chambal.

CV tried his hand at fishing, but in vain. Although he did lose a lure to what must have been the biggest fish in the river! So big, he had to cut him free! Biggest fish EVER!!! After my Mahseer last spring that is. 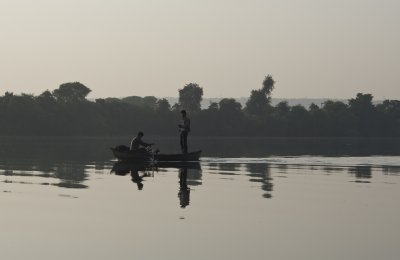 On the Chambal River

Saw lovely river birds and while casting for fish, a huge croc came up from under the boat, startling the oarsman on my side. It surfaced then quickly disappeared again. Saw him coasting through the water across the river later on. Also a tree filled with the large fruit bats we had seen on the way to Ranakpur a year ago in Rajasthan. 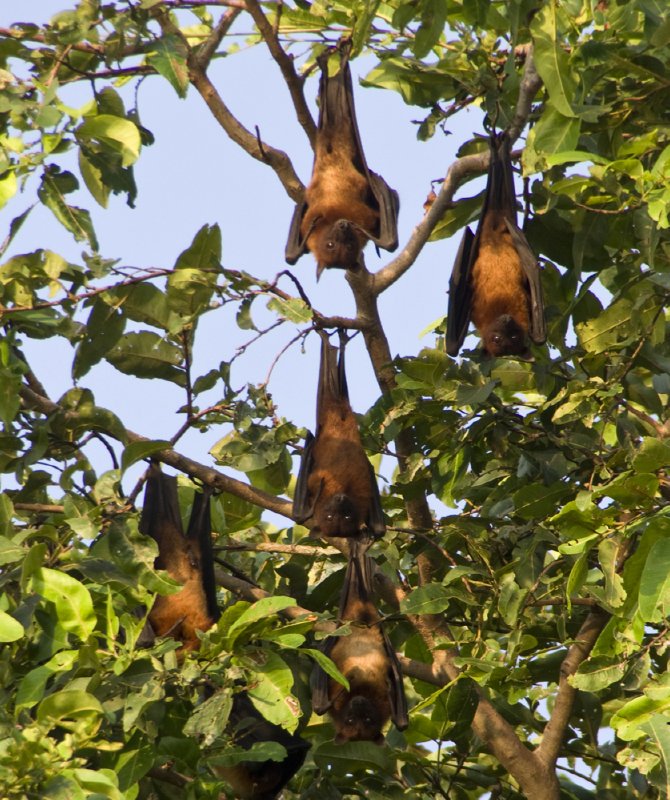 Fruit bats as interested in us as we were in them!

Bhainsrorgarh Fort was built in 1741 by Rawat Lal Singh and lies 50kms south of Kota and 235 km north east of Udaipur. It’s easily reached by train to Kota, or flight to Udaipur and then a couple of hours drive. The Fort is filled with history, trophies, paintings and photos of the family from years past. There are currently only five rooms, but a few more are being built in a newer addition that fits beautifully with the original structure. 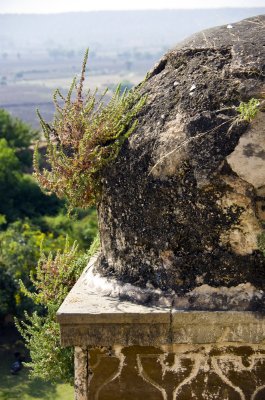 My room was beautiful and comfortable with a lovely stone terrace that overlooked the Chambal River, and was lit up by the lights of nearby cities reflected in the water. The air was sultry but cool, the constant chirp of crickets and frogs serenaded me, while the full moon (well almost full) crested the fort roof. Everywhere you look here a photograph begging to be taken. Beautiful landscapes framed by cupolas, vegetation laden ruins, archways and cenotaphs. Bliss. 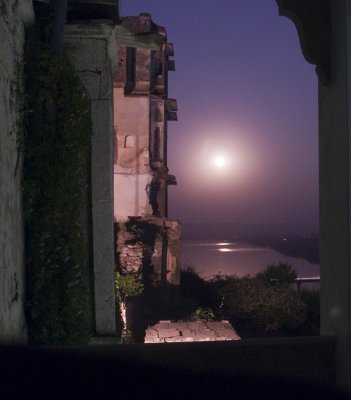 Moon over the Chambal, from my balcony. 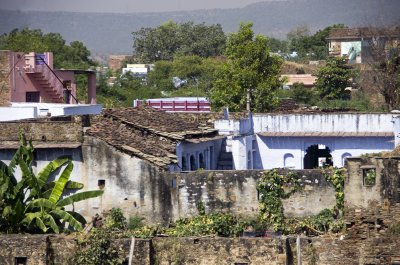 Our dinner was set up on the roof and the food delicious. All family cooked and family recipes, with dishes I hadn’t had before. A cool papadum curry, interesting vegetables and a wonderful barbecued pork rib that fell off the bone. Madhu oversees the kitchen, but is a vegetarian. Luckily Rajveer is not, and the barbecue was his domain. 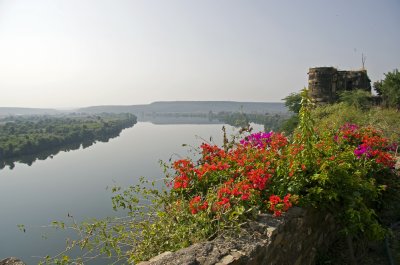 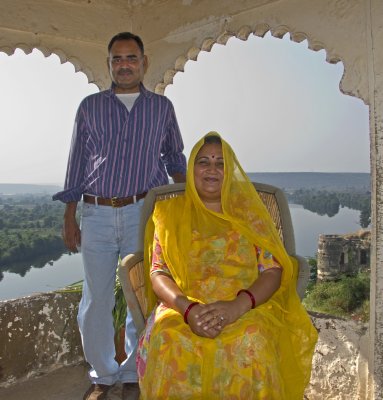 My gracious hosts, Rajveer and Madhu

Leaving Rajveer and Madhu, we were on the road, stopping at the nearby Baddoli temples. 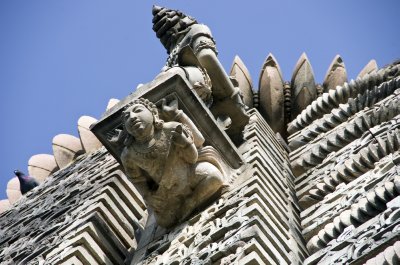 It was so pretty and detailed. Dedicated to Lord Shiva, Vishnu and Ganesha, the temples were built during the 10th and 11th century. The carvings were incredibly detailed and in very good condition. 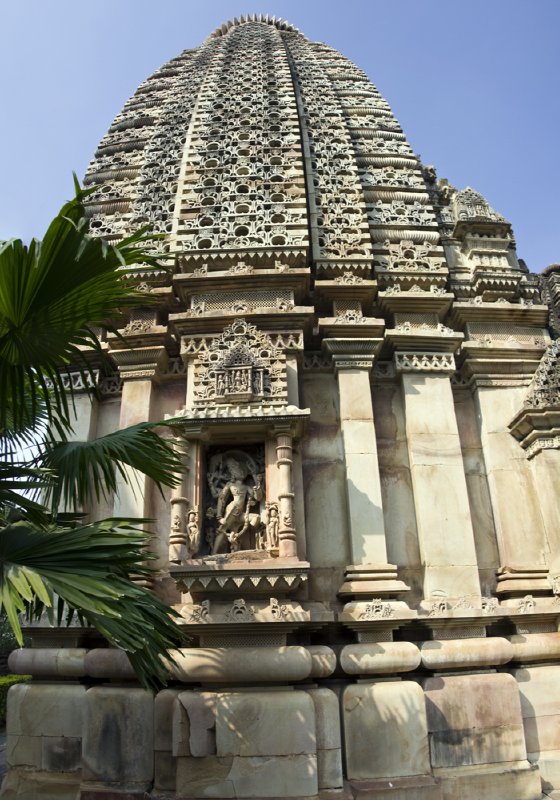 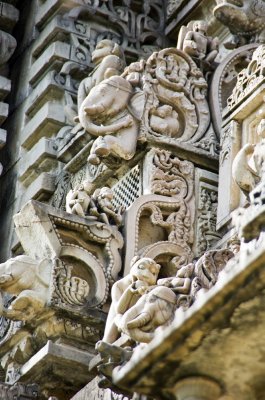 Finally, the minibreak was over and it was off to catch my flight back to Delhi. But….missed my flight back home, because it was overbooked and a tour group had beaten me to a seat! Sorry Madame, smile, head-wag… Sigh, c’est la vie! Decided to stay overnight at the interesting and overprices (2500inr) Rupi hotel next to the airport since Udaipur is an hour away, and my new flight left at 8am. A broken bathroom window had me propping the bathroom door closed (since it didn’t latch) to keep creepy crawlies out. The front door’s lock was none to secure either, so resorted to the old standby of putting my suitcase against it. Comfy bed tho so all good. Was interesting to get a knock on the door at about 10pm though. “Room service Madame?” Uhhhh, “no thanks” say I through the door, not wanting to scare the poor guy since I was already ready for bed. I'm sure he responded with a "head wag!" 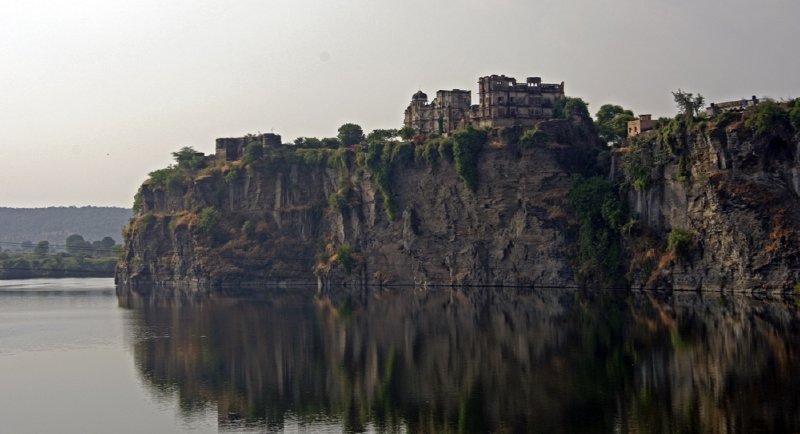 How amazing and beautiful. The photo's are wonderful!