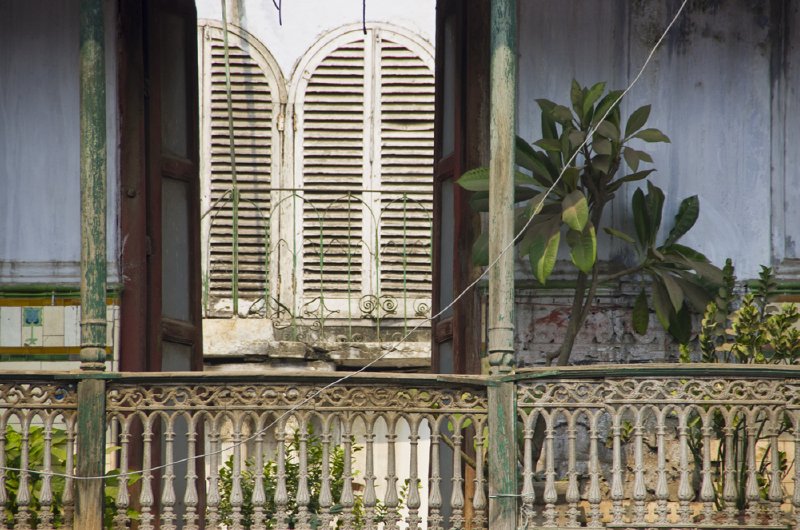 It's been an interesting time this trip so far. Spent a lot of time exploring Delhi and taking my friend Remy's father-in-law, Eero, around town. We revisited some of the places I've been before and many new spots.

This trip, I've been staying in a sattelite city of Delhi, Gurgaon. Gurgaon is a modern, rapidly growing city, where planning and growth-pace seems often to deny logic. Massive apartment buildings everywhere with constant construction of office, living and mall spaces that seem to spring up overnight. The journey into Delhi from Gurgaon is also an adventure with traffic amongst the worst I've experienced, all bottle-necking at a big toll booth with no apparent order, attention to traffic lines or respect for the 'pass only' lanes. It often seems like most people in the 'pass only' lane are paying cash however.

The toll lanes are probably about 1 km across, and to get to the very popular Ambience mall beside it (and pick up our friend Tam) you need to do a U-turn into the lanes coming into Gurgaon, and then somehow make your way across all those lanes, in an almost direct, perpendicular line. You also need to dodge the trucks and cars that inexplicably stop and park anywhere, without trying to pull over to the sides at all. This morning, a truck, pulling another truck with a rope, just drove straight across said lanes, without slowing, to get to the other traffic direction flow. Very interesting study in traffic flow! 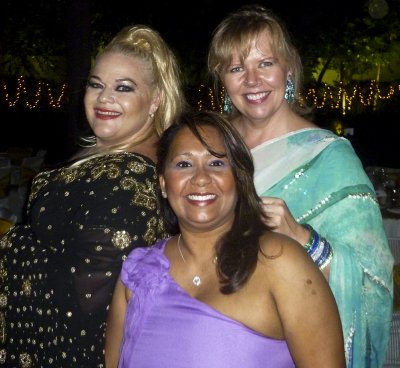 Anyway, I digress... the first big event of the trip was the October 15 Canadian Thanksgiving Ball. Eero arrived early that day from Finland and relaxed after the overnight flight, while Matti, Remy and Lisa were off to the Ball. Was just as wonderful as previous years, and even better because of the cool evening. The weather had started to turn cool early in Delhi and it is quite wonderful, if very smokey. Lynn flew in from Damascus to join the festivities so had a wonderful reunion. 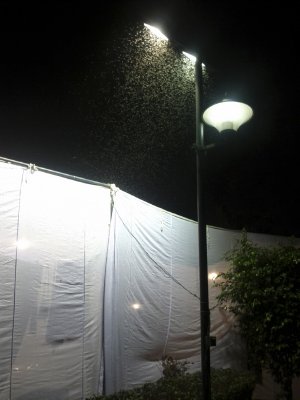 Night bug swarm at the British High Commission - crazy at this time of year, every 3 or 4 days, swarms of these tiny fly-like things swarm towards light, dying en-masse by the next morning.

The plan for Eero's visit was to explore the wide variety of sights, peoples, foods and adventures that contributes to making Delhi such a vibrant, interesting and colourful city. Even when blanketed in a gray haze! Our first adventrue was to Old Delhi, stopping first at Ashish's jewellery store. The old laneway his store is in, dates from the Mughal period, and still shows the beautiful painted decoration from those days. Eero went exploring and met a cute girl, happily posing for him on a cycle rickshaw.... and only 10 rupees for the photo!!! 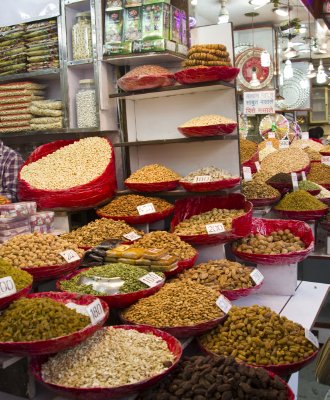 From Ashish's shop, we hopped into a couple of cycle rickshaws to take us to the Spice Market. It was even more chaotic than normal because Diwali was approaching and the shopping was approaching a Christmas-like frenzy! Still, we got there, and wound our way, coughing from the pepper-laden air, to climb up some old stairs to wonderful panoramas of the market and Old Delhi. 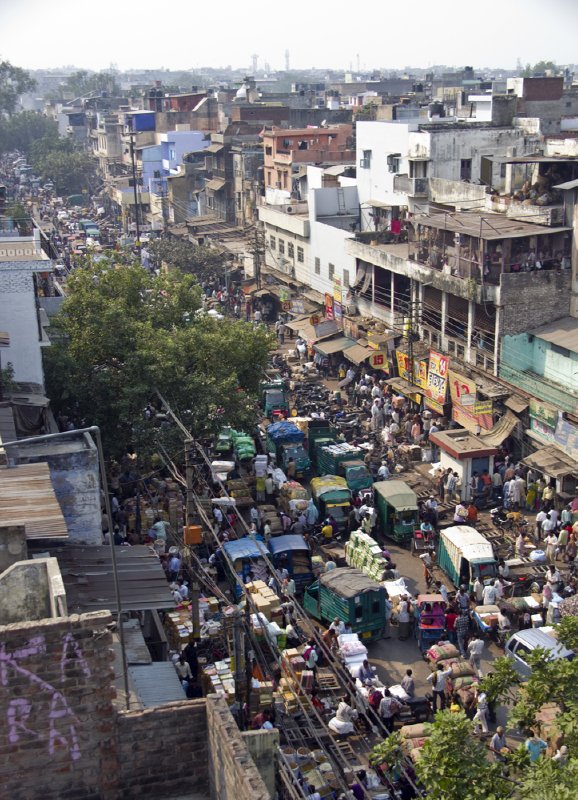 Looking down at the spice market in Old Delhi 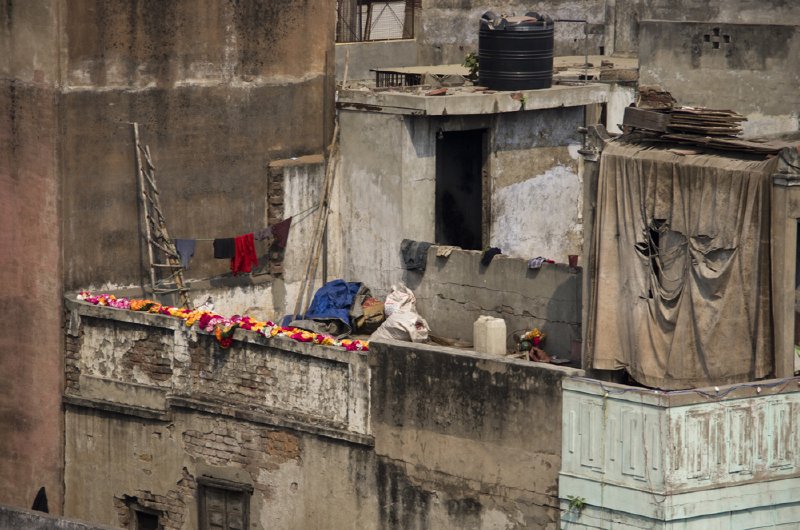 Next up was a drive to the west-end to visit the Toilet Museum. Yep, that's what I said! The Founder of Sulabh International Social Service Organisation, Dr. Bindeshwar Pathak, was a Gandhi follower and after his death started this organization inspired by Gandhi’s desire to make 'Untouchables" an inclusive part of India’s peoples. Cleaning latrine pits were one of the unsavoury duties by 'Untouchables,' who are at the absolute bottom of the Hindu Caste System. The museum is a pioneering non-profit voluntary organisation (NGO) in the field of Sanitation in India, and has consultative status with Economic and Social Council of the U.N. Now Sulabh is operating and maintaining more than 5,500 community toilet complexes in 1075 towns across the country. 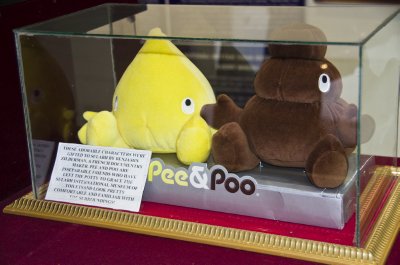 We had an assigned guide for the entertaining museum, but his boss, dubbed the Toilet Nazi would quickly jump in and take over. Very serious about his work he was! Even posed on the various displays for us to photograph... complete with emotive facial and body contortions! 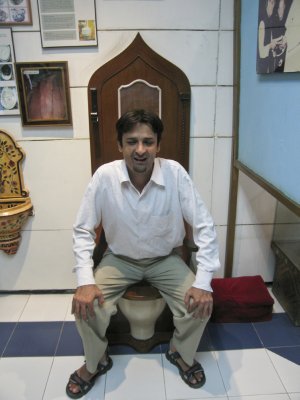 Our guide at the Sulabh Toilet Museum

What they do with human waste here is amazing. The Society converts the gasses to actual usable gas for lighting and cooking and generating electricity. They compost and dehydrate solid waste into useable garden fertilizers and turn water waste to useable and sanitary water. Not for drinking, but cooking, washing, etc. Pretty cool. 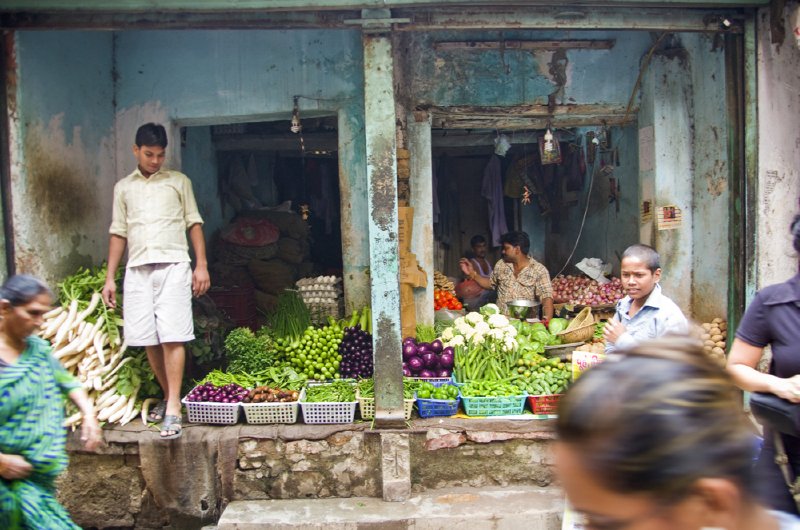 Another thing I've wanted to do for a while was next up, a street walk with former street kids of the Salaam Balak Trust through the streets of the inner city of Pahar Ganj around the New Delhi Railway station. 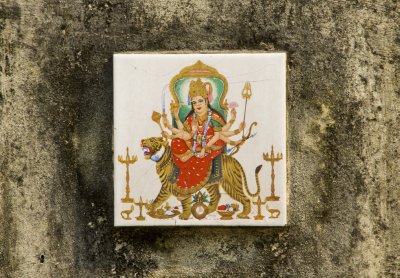 Durga tile in Paharganj - tiles of Gods are placed in alleys and areas to discourage public urination! 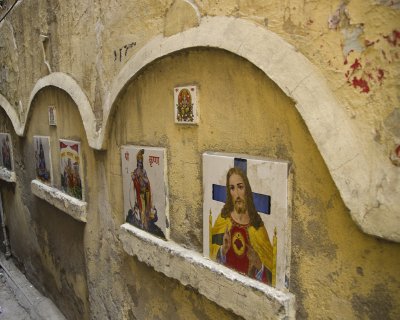 In India, all Gods are respected and revered, whether they are in their own personal religious group or not.

Our guide, Iqbal, was abandoned in a market at five years old by an abusive father, after his mother left the family with his sisters. He was taken in by an equally abusive couple finally running away and making his way to New Delhi. He has brothers and sisters, but has no idea where they are, or even what village he first came from. Now he is finished high school and hopes to continue on to be an engineer. He started guiding for Salaam Balak to get over his shyness talking to girls! which doesn't seem to be a problem now! 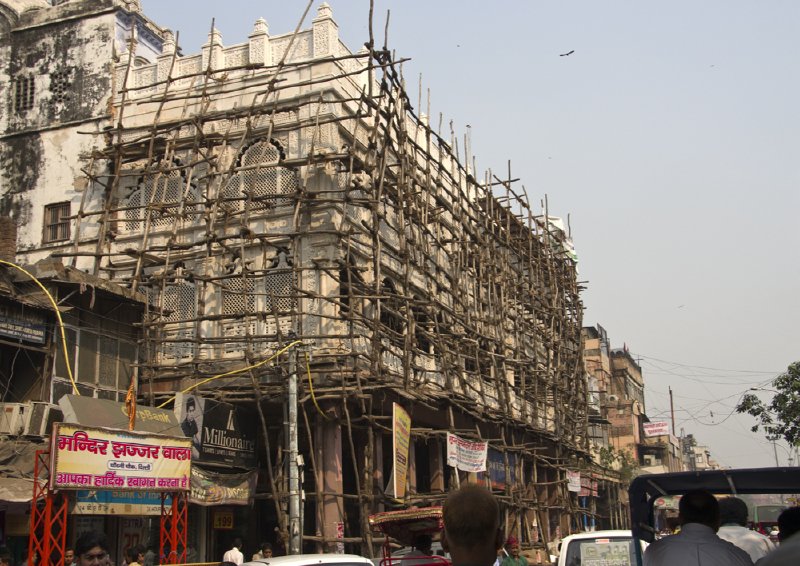 The trust provides a shelter and medical services for street children, trying to talk them into either returning home or joining one of their shelters and attending school. Iqbal also works as a mentor for these kids, trying to convince them to get off the street. They have 5 shelters in Delhi housing between 50-80 children each. Along with the 7 drop-in centres, the trust serves 3,500 children each year. There are an estimated 100,000 street kids in Delhi alone. 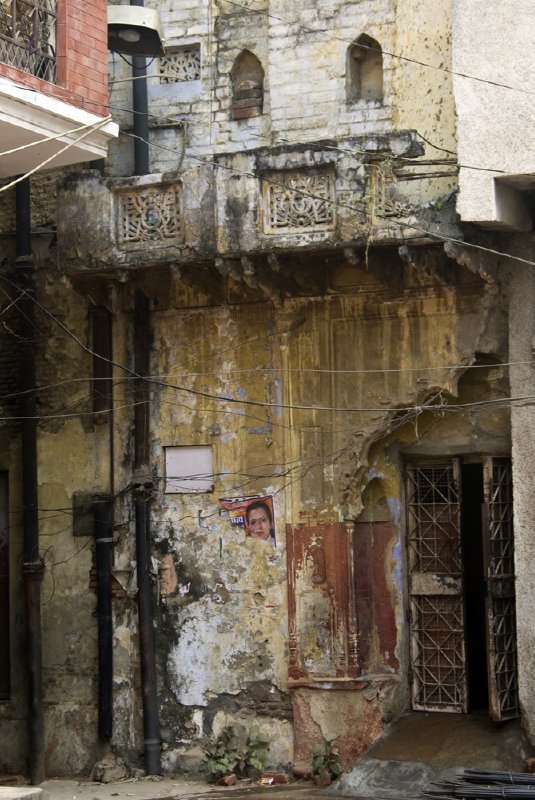 The street kids earn money in a variety of ways, including collecting recyclable garbage to sell to the rag picker depots and selling bottles of tap water to the 3rd class train passengers. Since the money they earn will be stolen when they sleep they need to spend it each day. Food is covered usually by the free food served at the Sikh temple kitchens. One of the ways they spend money is on video games. These games though are a long way from our kids' DS and gameboy machines! Drugs, glue-sniffing, and alcohol are unfortunately a predictable purchase as well. 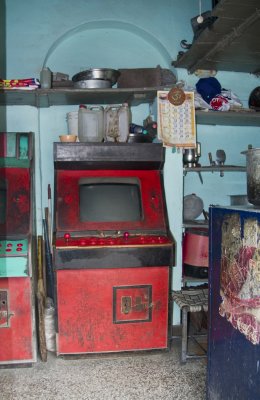 The Festival of Lights (Diwali) was coming up, so Main Bazaarr road was strung with lights and street vendors were selling Dia's. Terra cotta dishes you fill with mustard seed oil, then lighting a wick laid at the rim. The fireworks and firecrackers were pretty spectacular for Diwali in Gurgaon. There is a push not light them since the polution they contribute to is pretty incredible, but this has only really reached the middle and upper class families. These classes only makes up roughly 25% of the population, so there's not noticeable reduction - at least to my ears. May be bad for the environment, but like a sunset, is very pretty! 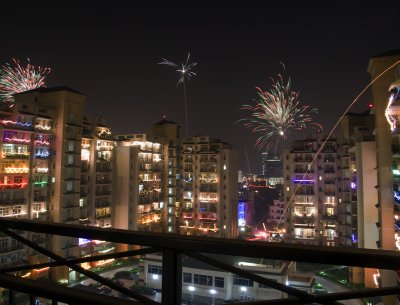 The fall is filled with all kinds of events, mela's (craft sales) and balls. One of the ones I went to this year was the New Caledonia St Andrew's Day Scottish Ball. It was wonderful! Started with getting our make-up done with the marvelous Akash, and then arrived amidst the very interesting bagpipe exertions of a Sikh band. After dinner to a modern cover band, the Scottish Highland band started, as did the Cielied dances - for those not in the know, it's a kind of a Scottish square dancing. Wasn't planning on it, but somehow we ended up stumbling through the far-harder-than-they-looked dances. And in a sari, which was quite the feat let me tell you! There was even a Canadian Barn Dance, which stumped all the Canucks at the ball. Have y'all hear of it? Probably those from down-east might know it? Still, we put in a valiant attempt... not pretty, but still... an effort :-) 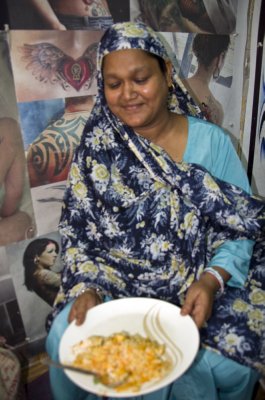 Shima, who cooked our wonderful lunch!

Another Delhi highlight this trip was lunch with my favourite bangle boys in Hanuman Mandir. They'd been trying to make a meal for me for a while now, and they finally pinned us down - November 3 at the market. We arrived, unsure as to whether they had remembered our date, and stocked up on bangles for the ball and for presents etc. When we were getting ready to leave and go eat somewhere else, I picked up the word khana in the conversation around us (English is very limited). And yep, they'd remembered. 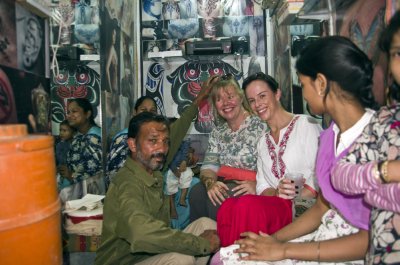 Aziz, Shima and some of their kids after feeding Tam and I with a wonderful feast.

We were led to the back group of go-downs in the market to Shamu's tatoo shop, where they'd set up stools and cushions for us. Aziz's wife Shima had cooked us a feast! Chicken Biryani, chicken korma, a super-thin type of roti, that was so thin you could see through it, naan and a meetha paratha (sweet paratha). All washed down with Limca - a grayish lemon soda, that's really quite good. The food was spectacular! Aziz and family are muslim, so biryani is a specialty. It was so good I couldn't resist Shima as she ladled three helpings onto my plate! No more eating for us that day! Business continued as usual as we were guests of honour in the little shop, only clients now sat on a stool outside the go-down. A man was getting his neck tatooed as we dined... kind of a dinner floor show! 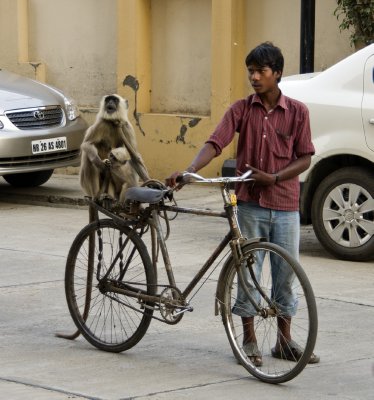 Monkey guard at the Gurgaon condo - She is employed to scare away the more agressive and troublesome macaque monkeys. Seems to work too! And a pretty good bike rider!!

Other interesting experiences in Delhi this trip? Went to one of two brew-pubs in the greater Delhi area, and apparently the better of the two. At the Galaxy Hotel in Gurgaon is Howzatt Bar. Had a free tasting flight before settling on their dark beer. Which was more of a light-dark beer, with shades of a porter taste, but more lager-like. Really quite drinkable and encouraging on the Indian beer front. 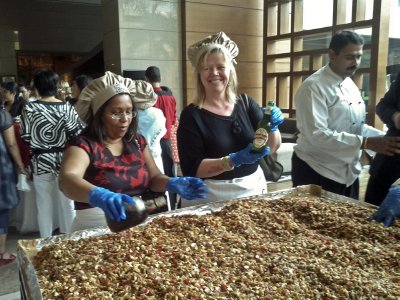 Then, last weekend we went to the Crowne Plaza in Gurgaon, where we joined the Christmas Cake and Pudding get-together! Masses of nuts, spices and fruits, mixed with bottles of rum and kingfisher beer. We got hats and aprons, donned gloves, then dove into the mass, helping to mix the wonderfully smelling concoction. It will go to make 1500lbs of christmas cake and pudding for the hotel. Then we took a break from our hard work with some mulled wine and sampling of batches cooked earlier for the event! Sureal India Indeed!

Will post on a fun mini-Rajasthan break to some lesser-traveled spots later this week, and am off on a two-week trip to Gujarat tomorrow! 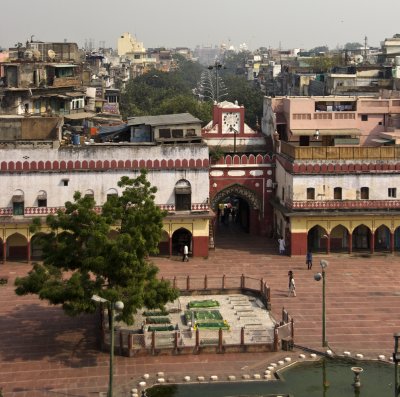