With a sidebar in Kerala 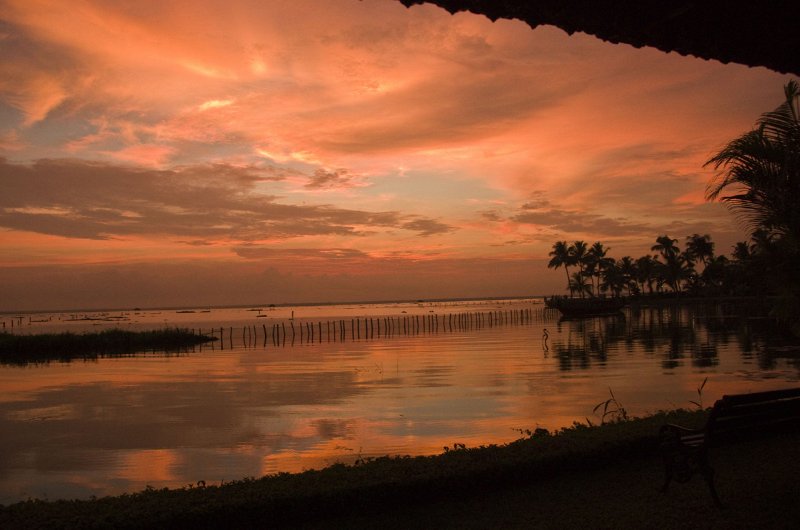 Always seem to be playing catch-up this trip! Next up I’m heading to Bandhavgarh for a week with my friend Yugdeep, so more wildlife photos will be coming! Getting tired of them yet? 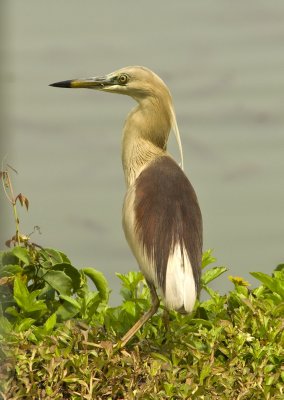 When last I left off, it was approaching the Easter weekend, so, with a long weekend free, weary expats were looking for some rest and relaxation. Off Lynn, Paul, Simon & I went for said RnR to Kerala. 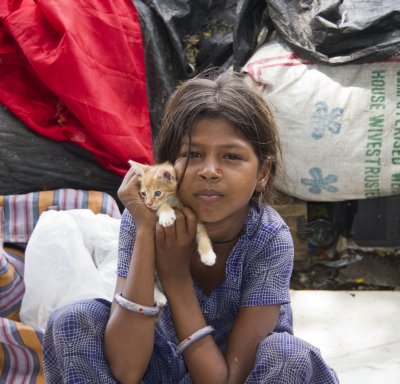 Little Girl and her kitten in Kochi

Quick flight to Kochi and then 2-hour drive to our resort, which was fabulous. Our Villa's deck opened out onto a long pool that wound its way in a meandering path through the resort. Ours was at the end, which also overlooked Kumarakom Lake, which the resort was named for.

Perfectly relaxing time for over-worked embassy folk! We swam, drank, ate and of course being in the birthplace of Ayurveda, took advantage of the spa. I had a lovely 4-hand Ayurvedic massage. Very relaxing, but a tad different from what my western-friends and family might be used to. You get to wear wonderfully flattering little disposable underwear, and then get massaged all over. And I mean all over! Really nice once you get used to it... 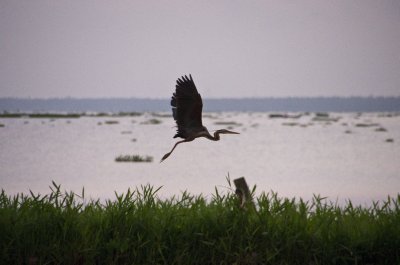 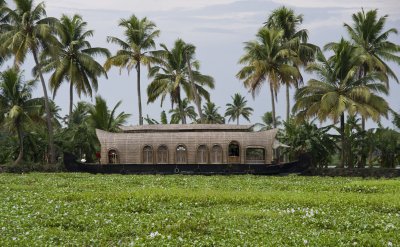 Keralan Houseboat in a lake filled with water hyacinths

We also took a lovely lunchtime houseboat trip around the lakes, with all kinds of fascinating sights. 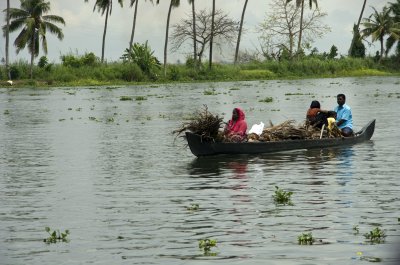 The larger houseboats don’t get down the more beautiful canals that we’d canoed through on my previous trip to the backwaters, but was still a nice way to spend the afternoon. 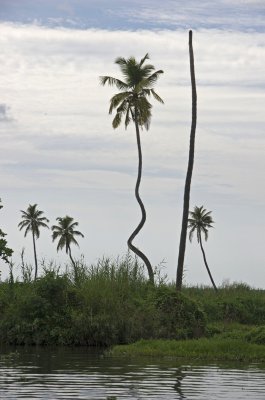 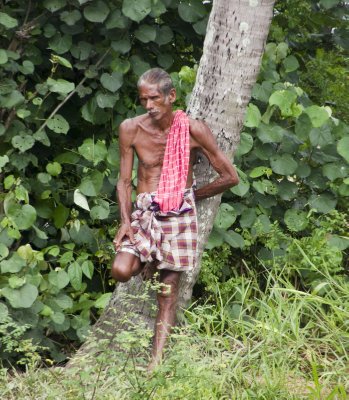 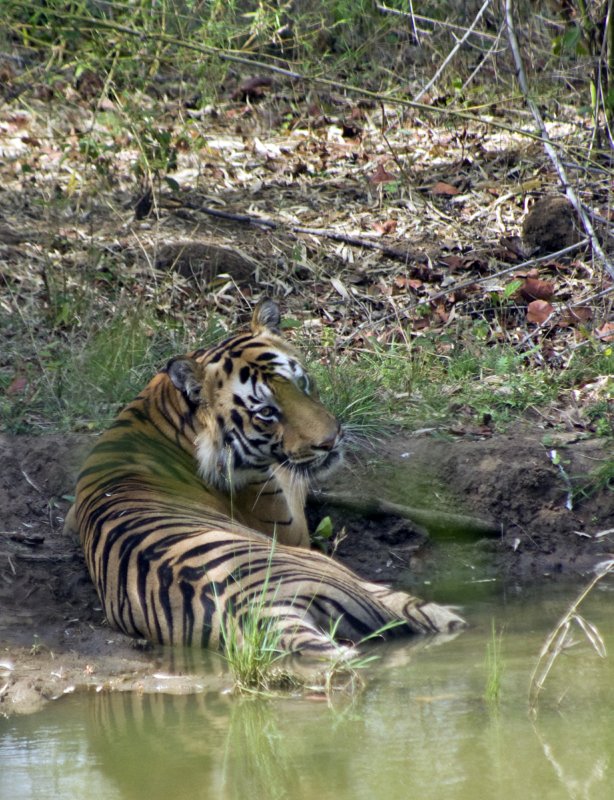 After Easter, I hit the road for a 10-day, spectacular wildlife trip, to three parks that had been on my ‘list’ for some time. My friend, and naturalist extraordinaire, CV Singh, also came with, so I was once again able to fully take advantage of the parks, in particular the wonderful birds of the area.

Our first stop was to Satpura National Park, and a lodge that is a wildlifer’s dream – Forsyth Lodge. Ecologically aware, and designed for people who love wildlife, the lodge also has, what I’ve not come to expect, excellent naturalists. David Raju was our naturalist for the visit, and he was exceptional. Showing us not only the beauty of the park’s creatures, both large and small, but sharing his obvious love for this special and unique spot with us. 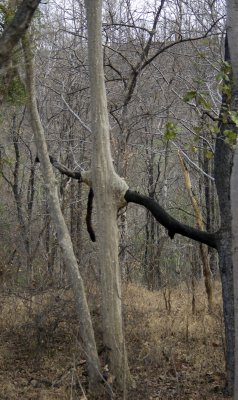 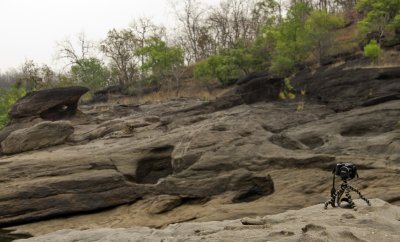 Satpura covers an area of 524 km² and joins up with the Bori and Panchmarhi Sanctuaries to become part of a larger Central Indian park area of 1427 km². The park is reached by boat across a river and strictly limits the number of vehicles allowed to enter each day, which is a wonderful thing both for the forest and for the experience of the people allowed in. The terrain is stunning, with beautiful forests, meandering streams, massive boulders, rocky gorges and grasslands. 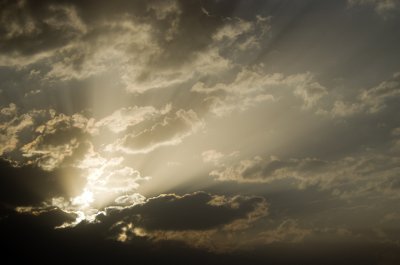 Famous for the density and sightings of sloth bear and wild dogs, we of course saw none of these! But as I have often experienced in India’s parks, I tend to not see what I’m told I will, where I’m told I will, so I’ve come to expect the unexpected with my sightings. 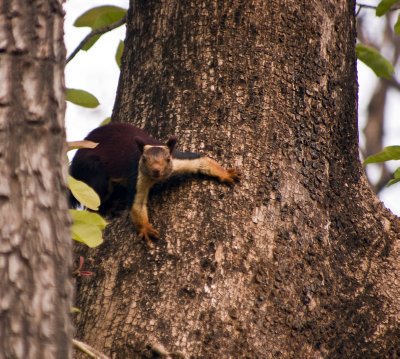 Satpura had some wonderfully different animals. Isolated populations of creatures far from the normal ranges they're experienced normally, like the Giant Malabar Squirrel. They’re the largest squirrel in the world, measuring over 3 feet long, including the tail, and are really beautiful. 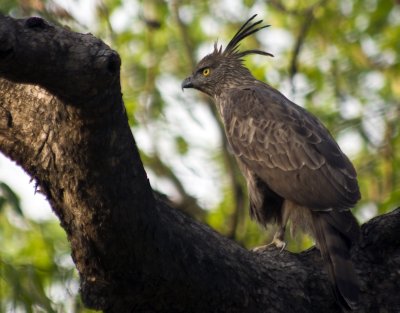 Changeable Hawk Eagle we watched hunting. He was so intent, scanning the forest for movement and likely lunch! 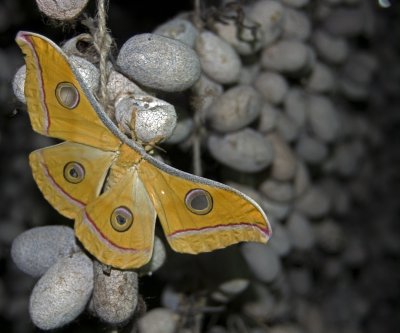 We also visited a tusser silk worm breeding farm. Was fascinating and the cocoons and moths so large.

After Satpura, we were off to Pench National Park, part of the forest system Rudyard Kipling wandered as he wrote about Mowgli, Sher Khan and Baloo. We stayed at Tiger N Woods in lovely rustic raised wooden rooms called Machaans. The setting was lovely, but the park experience not so great. Tiger chasing is not what I go to the parks for, and although we repeatedly said this, we unfortunately did a lot of tiger chasing. I’d give the park another chance, because I’ve heard good things from other wildlife-focused people and the landscape looked lovely, but probably wouldn’t make a special trip. 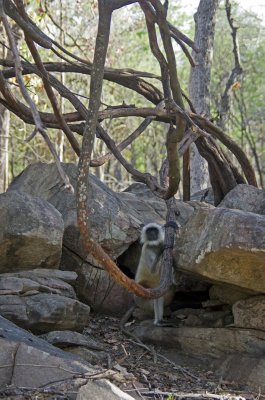 Langur on a vine

Learned a good lesson here though. After schlepping shampoo around when I travel, only to use supplied products at the various hotels, I didn’t bother this trip. At Tiger n Woods we were supplied with lovely little packets of Black and Shiny shampoo!!! Yup! And it was actually black! I quickly lathered up and rinsed at super speed! Not being too certain about the listed products that promised to make my hair black and shiny! You know you’re off the typical foreigner tourist trail when… 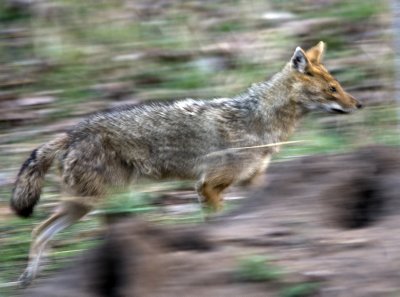 Had a really lovely time on our last afternoon when we met up with an old friend, Dharma, from Kings Lodge in Bandhavgarh. He drove us around some buffer areas and villages surrounding Pench, which provided us with proportially larger photo oppurtunities for this stop. And all of the new bird sightings (referred to as lifers apparently) for me. 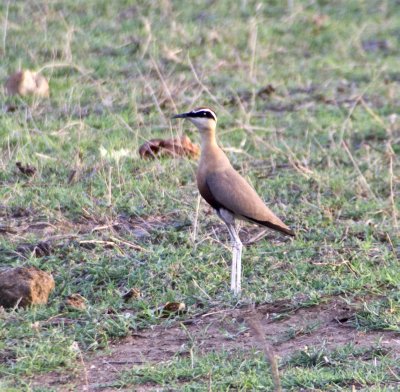 Paradise Flycatcher diving for a drink

Our final park was Tadoba Tiger Reserve in Maharashtra. And what a fantastic park it was! This park is not typically on the non-Indian tourist list, and is not very well serviced. This makes it doubly useful to have a local guide to help, especially if you don't speak Hindi. The place we stayed at is one of the only full-service lodges in the park and was pretty great. Tiger Trails is also focussed on wildlife people and set out in massive grounds with look-outs, water holes and machaans to explore, many of the waterholes set up with motion-tripped cameras that operate at night as well as the day. Unfortunately for us, it was so friggin hot, we would retire to our rooms in between drives, where I would plant myself directly in front of my full-blast AC. 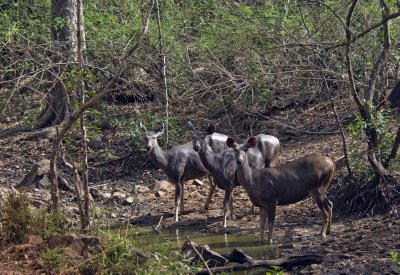 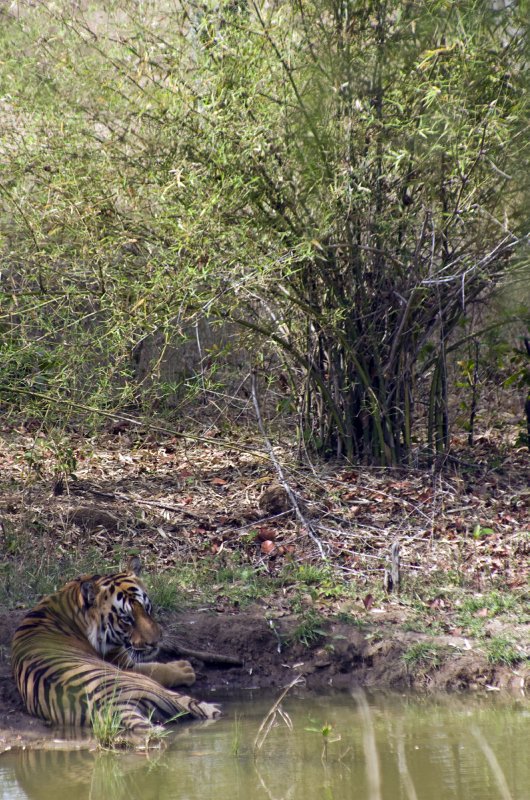 Fortunately for us, it was so friggin hot! giving us amazing sightings from animals frequenting the refreshing waterholes. Each drive brought us something new, along with at least one tiger sighting. A mother with 3 cubs was spotting a few times -- with cubs and without. A wonderful extended sighting of a massive young male tiger, coming out and sprawling in a water hole to cool off his bits. 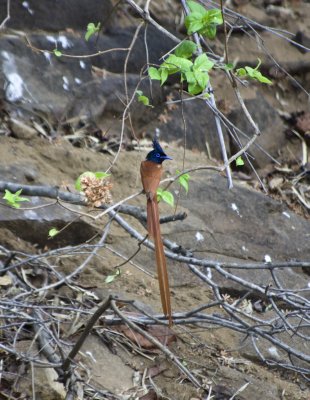 The birds were spectacular, in particular the paradise flycatchers, which were new for me and so showy. They were also super-fast, so hard to capture, but we tried a lot. I think our driver thought we a bit crazy with our bird-focus -- he'd have a lot in common with my friend Lynn! Probably half my photos must have been of these lovely birds. 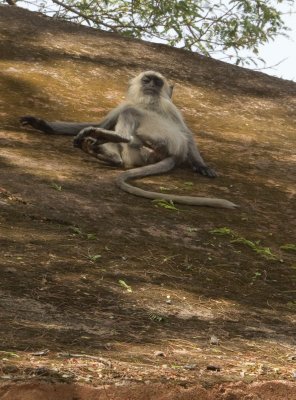 Young Langur playing at sliding down the roof 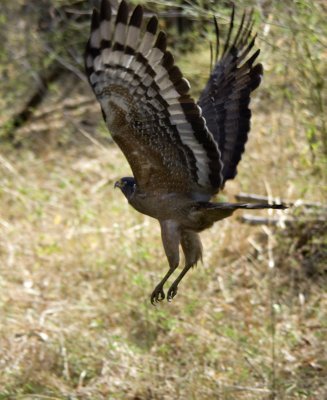 On our last drive, CV spotted a mating pair of sloth bears. They were too far for good photos, but not too far for a good and interesting sighting as they played, chasing around a tree before realizing we were watching and melting into the grasses. 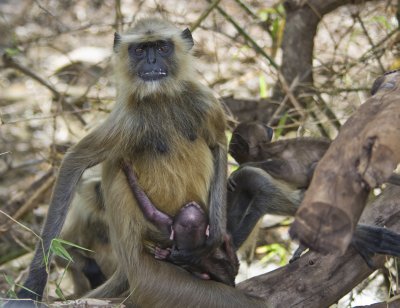 We came across an Indian nightjar that we spooked by stopping to photograph it. The poor thing flew straight into a clump of bamboo, getting stuck! It then just hung there and froze, in an attempt to do the usual and be camouflaged. Pretty funny! When we returned on the circuit it was sitting on a tree branch, nicely extricated. 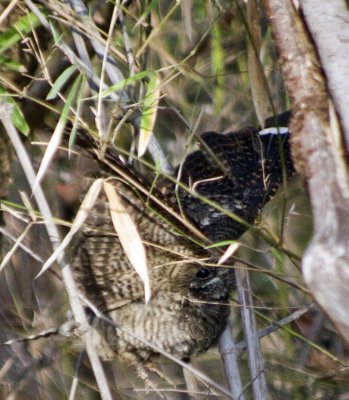 Indian Nightjar stuck in some bamboo

Tadoba is now on my list to return to and check out during the cooler months. See it in different seasons, which are all apparently good for tiger sightings, though maybe not as frequent. 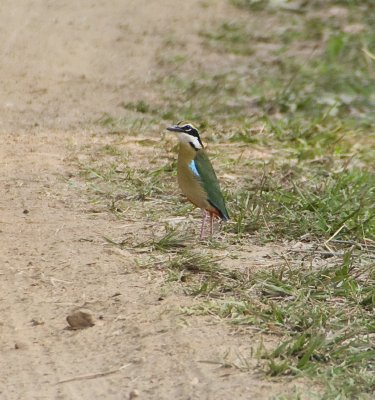 Indian Pitta, saw one, at the start of their migration to the park, then they were everywhere! 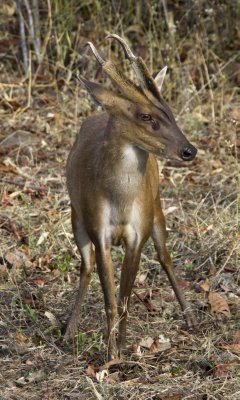 Heading into this trip I thought it would be really long – 10 days of early mornings continuous jungle drives. It went so fast! Faster than the usual week of such trips. Freaky how fast time flies these days! 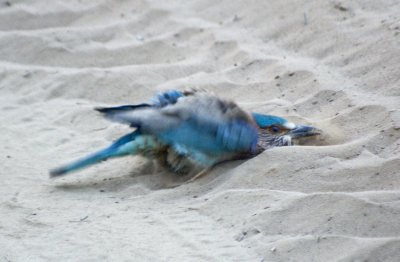 Overlooking Rishikesh from our balcony at Ananda Spa

And now, just back from pampering ourselves. Lynn and I went up to Ananda Spa, set high in the foothills of the Himalayas, above Rishikesh and the Ganges. I’d been here once before with Christa, and it doesn’t lose anything the second time around. Had a wonderful time in the clean mountain air getting wonderful spa treatments. Pretty sure I must look at least 10 years younger now! 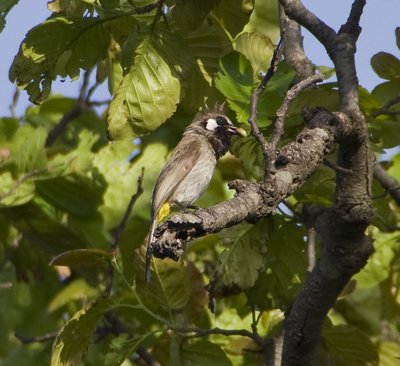 Himalayan Bulbul from the balcony

On the way back down the mountain, we passed all sorts of cautionary signs on the curvy, steep roads. One struck me “life is full of fun, don’t end it now,” which was particularly interesting given a vedantic book I’d scanned at the spa about reaching my potential and spiritual growth. It was mostly quite interesting and a had a fair bit of good advse, but in one section it said, and I’m paraphrasing here, ‘playing toys as child is expected; as an adult is disgusting’; and ‘passion in a young man is normal, passion in an older man is disgusting.’ Hmmmm.... Pretty sure I’ll not achieve said enlightenment... and pretty sure I don’t mind all that much. I've discovered my chosen path in life is not so much Eat, Pray, Love as it is Eat, Play Love!

Happy trails! Off to the park tomorrow and then moving into the High Commissioner’s House, cause Lynn is their dog-sitter! 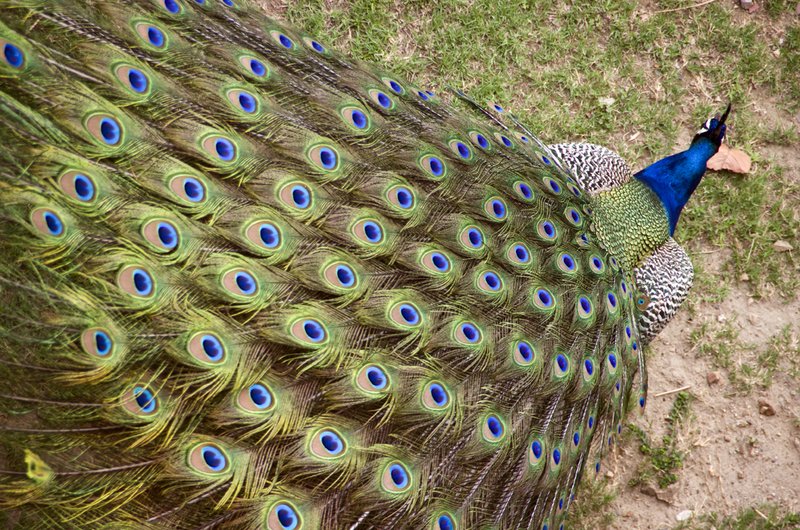